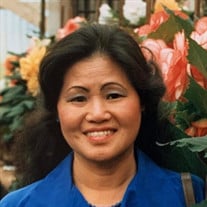 Li-ming Kuo Chu 1937-2020 Reno, NV and Belmont, CA Li-ming (83) was born in the town of Lungien in Fujian Province of China to Shao-Ying Kuo (father) and Shu-Yeih Kuo (mother). Her siblings are Siang-Wen (deceased), Li-Ann, Ba-Hong, Ba-yun, and Pa-Yu Kuo. She and her family immigrated to Taiwan after World War II and she spent much of her childhood helping her parents raise her siblings. She began attending nursing school at the age of 15 at National Taiwan University Hospital. After graduating, she worked as a nurse at National Taiwan University Hospital and during that time she met Shih-Fan (George) Chu. She and Shih-fan then moved to the United States, where they were married in Seattle, Washington in 1963. Li-ming worked as a nurse in Chicago while Shih-fan completed his PhD studies in Champaign-Urbana, Illinois. They had their first child, David, in 1964. They moved to Reno, Nevada, where Shih-fan became a Professor in Economics at the University of Nevada Reno. Their daughter, Diana, was born in 1969. Li-ming earned her Bachelors and then her Master’s Degree in Nursing from the University of Nevada Reno. She worked as a nurse both at St. Mary’s Hospital and Washoe (Renown) Medical Center. She joined the faculty at the Orvis School of Nursing at the University of Nevada Reno where she taught Obstetric Nursing for many years until she retired as Assistant Professor Emeritus. During that time, she also served as Treasurer of the Nevada Nurses Association and was awarded the March of Dimes Nurse of the Year in the Leadership category. Li-ming cared deeply about her students and her friends and family. She and Shih-fan were active in the Northern Nevada Orchid Society. She was a phenomenal cook, loved to shop and travel, and enjoyed spending time with her many life-long friends and neighbors in Reno. Caring for her family, especially her grandchildren, was her passion and her joy. Li-ming is survived by her son David Chu, his wife Robyn and children Alex and Erik; daughter Diana, her husband Roy Lin and children Kylie Lin and Joshua Lin; her sister Li-Ann Chen and brothers Bahong Kuo, Pa-Yu Kuo, and Ba-yun Kuo. She will be fondly remembered as a strong, independent, good-humored, steadfast, and loving wife, mother, sister, and friend. Due to current COVID-19 guidelines, a private burial will be held Tuesday April 14th, 2020 at Skylawn Memorial Park in San Mateo, CA. The family requests that in lieu of flowers to send donations to the Peninsula Volunteers (https://www.penvol.org/donate/) in her honor. We invite you to please share a memory, photo, or tribute of Li-ming on the Tribute Wall. To ensure the health and safety of our community, we are following all guidelines set by local, state and CDC officials. If you are planning on attending a service, please contact the funeral home in advance, so that we can plan accordingly.

The family of Li Ming Chu created this Life Tributes page to make it easy to share your memories.

Send flowers to the Chu family.