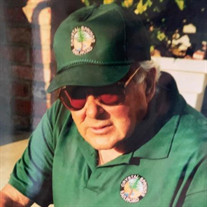 Leo was born on December 4th, 1925 to Frank and Sonia Schlocker. Born and raised in San Francisco, Leo left school at age 16 to help support his family when his father fell and broke his hip. This would start his life long dedication to helping everyone around him. At age 18, like everyone else of that time, Leo joined the military. Though poor eyesight prevented him from serving on the front line he was determined to serve his country and became a Radioman 3rd class in the Navy. In 1946 he left the Navy and started what would be nearly 20 years working at Langendorff Bakery. He would marry the love of his life, Phyllis, on July 5th, 1947, and their first child, Linda was born in October of 1948. Linda was joined by Sandy in 1951 and David in 1953. Most weekends you would find the whole family water skiing at Parkside with life long friends the Priolas. In 1963 Leo and Phyllis decided it was time to move south a bit and found a house down the street from the Priolas in San Mateo on Lexington. Leo quickly became the life of the neighborhood with his nonstop jokes and his quick responses to anyone who needed anything. After having worked the night shift at the bakery for just under 20 years Leo decided it was time for a change and became a repairman for Sears in 1965, where he would work until he retired in 1990. While people would always say they would come to Leo for help with their refrigerator or their washing machine because of his experience at Sears, the family knew it was really because they loved to have Leo share his most recent jokes and a few laughs with them. Leo and Phyllis would become grandparents for the first time in 1974 when Linda's first child was born. They would end up with 6 grandchildren and 13 great-grandchildren. Going to Grandma Phillis and Grandpa Leo's house was like going to the fair for the grandkids. Every time they would come over Leo would say "Remember, this is my house. It doesn't matter what your parents say you can have anything you want!" Living on Lexington meant that every 4th of July the family would gather at the house and sit in the driveway to chat with the neighbors and watch the parade go down the street. After the parade, everyone would walk down the street to the Rec Center for the fair. Linda, Sandy, and David started this as teens hanging out with their friends and would eventually bring their children and then their children's children. The 4th of July in the Highlands was frozen in time with dunk tanks, hot dogs, and carnival games. When he retired Leo needed a new hobby. Having always loved trains, the obvious thing to do was rip out his lawn and build a garden railroad. Leo and Phyllis became members of the Bay Area Garden Railroad Society (BAGRS as they like to be called) and had an amazing garden railroad. Leo would love to see someone walking by and invite them back to see the railroad. People who would leave the Highlands would often return on the 4th, or around the holidays, or any other time just to stop by and see what additions they had made to the railroad. In 1992 all the kids and grandkids would come over to help them as they were part of that year's Garden Railroad Convention Tour. We had decorations, popcorn, and hotdogs. Leo had on his conductor hat and he would spend the whole day and into the evening talking to all the busloads of people and welcoming them to the Lexington P&L Railroad. He loved to show off all the towns with the buildings he had named after his grandkids. A lot of things have changed in the neighborhood over the years, but well into his 90's you would find Leo walking down to chat with neighbors, or in the backyard showing off the trains. He is greatly loved by his family and will be forever missed.

Leo was born on December 4th, 1925 to Frank and Sonia Schlocker. Born and raised in San Francisco, Leo left school at age 16 to help support his family when his father fell and broke his hip. This would start his life long dedication to helping... View Obituary & Service Information

The family of Leo Schlocker created this Life Tributes page to make it easy to share your memories.

Send flowers to the Schlocker family.