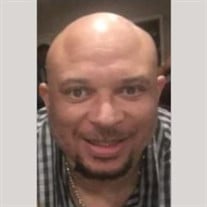 7/28/1975 (Redwood City Ca) 04/13/2020 (San Jose, Ca) Proverbs 3:5 Trust in the Lord with all your heart, and lean not on your own understanding; Those of us who’ve been through great loss know that from then on, our days will be different. There’s an ache that becomes duller with time, but never really leaves. Things hit us out of the blue…Lawrence passed from this life unexpectedly. Lawrence known as “Lolo” to his family and close friends, and called the “gentle giant” by his Grandpa Daniels (who preceded him in death) has left us with that dull ache… We will miss you Lo and look forward to seeing you again one day. In time, when the pain of our sorrow begins to fade, we realize like never before, that life has a fragile beauty, and we’re forever changed. Lawrence will live on in our hearts forever… Lawrence grew up in Fremont, Ca and graduated from Washington High School, he attended Chabot College in Hayward, Ca, where he played football. After deciding that he did not want to pursue a career in football, Lawrence went on to attend DeVry University in Fremont, Ca, where he received his degree in Computer Science, which led him to his career at Johnson Controls Security, where he was still employed upon his death. Lawrence enjoyed his job. He was a Field Service Technician. Installing and servicing surveillance and security systems in commercial establishments. Many friends and relatives would see Lawrence around the various Bay Area Malls, however, he was working - not shopping, Lawrence did not like to shop! Lawrence and his fiancée Rita took many road trips up and down the coast of California and to various other locations. They enjoyed being together and dined at just about all the restaurants in California. As we all know… Lawrence enjoyed food. They even found a restaurant named after him – Lolo’s Mexican Restaurant in Morro Bay, California. When he was at home his favorite spot was on the couch with Rita, he loved watching sports, win or lose his favorite team was the Raiders. Lawrence was extremely close to his brothers. They got together as often as possible and would go fishing, family and work obligations permitting. Whether on the water or hanging out, the three brothers would catch up on events within their families, reminisce of childhood adventures and exploits, and because they were also very competitive, would vie for the most or largest fish of the trip for bragging rights! Lolo’s greatest desire in life was to co-parent his one and only daughter Zadie Giselle Booker. For her birthdays and holidays like valentine’s day, etc. this “gentle giant” would sit down and actually write love letters to his daughter, not knowing if she would ever receive them, but he still continued his pursuit in writing “love letters to my daughter.” Lawrence is survived by his parents: Sidney D Booker Sr of E Palo Alto Ca, Cheroyal Daniels-Spears of Fresno, Ca, His brothers Sidney D Booker, II (Nancy) of Valley Springs, Ca, Joseph R Levy (Suszetta) of Fresno, Ca, His loving fiancée, love of his life and soulmate Rita Galan, of San Jose, Ca, his daughter Zadie G Booker of Tigard, Oregon, his Grandmother Catherine Daniels, of Menlo Park, Ca, Step-Father Robert J Levy (Nikki) of Fresno, Ca. A host of Aunts, Uncles, Nieces, Nephews, Cousins, Friends and Co-workers. His awesome supervisor at Johnson Controls security, Eddie Montalvo. Lawrence (Lolo) will be greatly missed by many… We love you Lo! Service details will be posted as soon as it becomes available. To ensure the health and safety of our community, we are following all guidelines set by local, state and CDC officials. If you are planning on attending a service, please contact the funeral home in advance, so that we can plan accordingly.

The family of Lawrence Dwayne Booker created this Life Tributes page to make it easy to share your memories.

Send flowers to the Booker family.