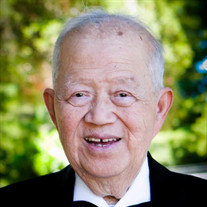 Larry Kam-Kong passed away peacefully in his sleep on June 1st, 2021, in his home with his loving wife Sue Phooi-Wah Soo by his side. Larry would have been 93 on his birthday this year. Larry, son of Wong Hong-Kay and Lai Kwan-Tai, was born in Hong Kong in 1928. He was the youngest of three brothers, with 4 sisters. He was respected and loved by his friends and family. Larry loved chemistry, he developed production process for young ginger in syrup with sales in Hong Kong and overseas. Later in his career, Larry became one of the major producers in Hong Kong for Aluminum cookware and small electrics with Du Pont’s Teflon / Silverstone license, using aluminum sheets from his company's foundry and rolling mill. The cookware and electrics were sold to most major countries around the world, including USA , the cookware were sold in JC Penny, Target stores, K-mart, Walmart and Kroger’s supermarket chains. He loved the outdoors and enjoyed hunting for game birds, diving and snorkeling, and fishing in the ocean. Larry took his wife and children fishing and swimming, cooking and enjoying the fresh caught fish and seafood on his Chinese yacht. Larry also enjoyed bowling and competed with his team in local bowling leagues. Larry valued education and sent all his children to Universities in England and the United States, where they all graduated with honors. Upon retiring to the United States, he bought a fishing boat and continued to take the children fishing in the San Francisco Bay Area. The family took trips to sight see around the United States. Larry will forever be loved and cherished by his wife, Sue Phooi-Wah, his sons: Edward, Stephen, Charles, Samuel, his daughters: Donna, Grace, his grandchildren: Gavin, Nicholas, Richard, Matthew, Joyce, Jacqueline, Alexander, Ryan, his great grandchildren: James, Aerin, Adrian, Chloe, Edward, Quinn, Ellie, Rowan, Stephanie, Nyx. This year would have marked 56 beautiful years with his wife. Their marriage was the embodiment of love, commitment, and partnership. Larry was blessed with 4 generations, he will be forever remembered and missed dearly by his family and friends.

Larry Kam-Kong passed away peacefully in his sleep on June 1st, 2021, in his home with his loving wife Sue Phooi-Wah Soo by his side. Larry would have been 93 on his birthday this year. Larry, son of Wong Hong-Kay and Lai Kwan-Tai, was born... View Obituary & Service Information

The family of Larry K. Wong created this Life Tributes page to make it easy to share your memories.

Larry Kam-Kong passed away peacefully in his sleep on June 1st,...

Send flowers to the Wong family.