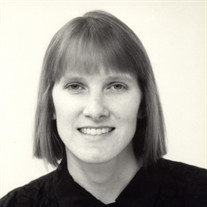 Karen was born May 3, 1959, in Orange, California, the first child of Barbara Ames Gangnes Hallenbarter and Donald Gangnes. The family moved to Bellingham, Washington, in the fall of 1959. It was the first of many moves throughout Karen's early childhood. Next was a move to Belfair, Washington, where her brother Byron was born in 1960, followed by her sister Cindy in 1962. They then moved to upstate New York, where her brother Drew joined the family in 1964. The final move was to University Place, Washington, where the family settled in 1967. Growing up, Karen had many interests. She participated in Brownies and Girl Scouts, was a talented artist, and loved to sing. She excelled at the violin, eventually joining the Tacoma Youth Symphony, and, with her guitar, would lead the campfire, singing on every family camping trip. Even with all of her interests and activities, Karen was an excellent student, taking challenging courses, learning Russian, and graduating from Curtis High School in 1977 at the top of her class. Karen was an excellent example to her younger brothers and sister, who were inspired to follow in her footsteps. She attended the University of Washington, earning a Bachelor's degree in Electrical Engineering in 1981, a time when there were few women in the field. After graduating from UW, she took a position at AMPEX Corporation in Redwood City, California. Soon after moving to Redwood City, she met her future husband Kurt Hallamasek, who also happened to work at AMPEX. It was the beginning of a 40 year love story. In 1986, Karen enrolled in the Biomedical Engineering program at UC Berkeley, where she received a Master's degree and went on to pursue a Ph.D. At age 29 she had finished her coursework and passed her exam when she became ill. She was eventually diagnosed with a rare form of non-Hodgkin's lymphoma. She survived the cancer with an aggressive experimental treatment regimen, that included chemotherapy, radiation treatments, and a bone marrow transplant. Side effects of these treatments would impeded her for the rest of her life. Radiation damage to her lungs and spinal cord would manifest gradually over the years, and eventually result in her untimely death 32 years later. In December of 1989, Karen and Kurt were married in a small civil ceremony in Reno, Nevada. In July of 1990, a larger wedding ceremony was held at St. Jude in Redmond, Washington, for the families to attend. Karen did not return to UC Berkeley to finish her Ph.D. after her cancer treatment. In the first few years after the treatment, she was weak bur able to function nearly normally. She worked at two engineering startups: first at Integrated Motion Incorporate in Berkeley, and then for 4D Video in Sebastopol. In 1993, Kurt and Karen bought a house in Oakland. Kurt returned to work at AMPEX after he finished grad school. In 1996, their efforts to start a family were rewarded with the birth of their daughter Margaret Elise Sara. In anticipation of the birth of twins, Cale and Emily, Kurt and Karen moved into a larger house in Union City in November of 2000. In 2004, the family moved to San Carlos. At White Oaks Elementary, the twins started kindergarten and Maggie started third grade. Karen raised her three children into responsible, lovely people who loved her and eventually supported her and cared for her as her health increasingly failed. Karen often reflected on how her children grew into responsible adults. Her children are her proudest legacy. In 2006, with a=the children all in school, she returned to work at AMPEX as a software engineer, despite continuing to struggle with the aftereffects of her cancer treatment. Her managers and co-workers never knew the full extent of her health issues. She was perceived as intelligent, responsible, reliable, agreeable and extremely competent. She worked there until 2017. As time went on, Karen's lung capacity increasingly deteriorated. Her nerve damage and muscle weakness worsened, and she had difficulty eating. The last four years of her life were a struggle for breath and physical comfort. For the last two years of her life, she was breathing with the aid of a mechanical ventilator. During this time of suffering, Karen did not complain about her health and suffering. She remained as active as she could possibly be with her failing body. She was actively involved in managing her treatment, the household finances and planning birthdays and holidays. She was always in close contact with her children. This, more than anything, sustained her will to live. She enjoyed watching the birds in the backyard, and the family of deer that would occasionally wander up to graze. 31 tears after that first treatment, she ultimately succumbed to her radiation-damaged lungs. She is survived by her parents Barbara and Don, by her siblings Byron, Cindy and Drew, by her husband Kurt, and by her children Maggie, Emily and Cale.

Karen was born May 3, 1959, in Orange, California, the first child of Barbara Ames Gangnes Hallenbarter and Donald Gangnes. The family moved to Bellingham, Washington, in the fall of 1959. It was the first of many moves throughout Karen's... View Obituary & Service Information

The family of Karen Gangnes Hallamasek created this Life Tributes page to make it easy to share your memories.

Send flowers to the Hallamasek family.