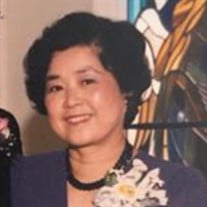 Ju-chu Tsai Lin passed away on February 19, 2021 after a long illness. She was blessed to transit onto her next phase at home peacefully. She was 85. Ju-chu, also known as Julia, was born on December 10, 1935. She was born in Hsinchu, Taiwan, and later moved to Taipei with her family. She was the child of Intang Tsai and Szemei Tsai, the second of five children and the eldest daughter of the family, a role that prepared her well for her path as a dedicated mother to her two daughters and grandmother to her three grandchildren. She attended Tamkang College in Taiwan and earned a degree in English, a boon to her in the United States in the second part of her life. She was a intrepid traveler in her thirties and forties. Together with her husband Hong-yee (Henry) Lin, they explored many parts of the world. They left their footprints in Asia, Europe, Africa, and the Americas, and they never forgot to delight their two girls with fun souvenirs when they returned. When she was home she often brought a touch of other cultures into the kitchen. In addition to delicious and nutritious Chinese cooking, she also prepared Western fares like macaroni salad. She became interested in Western baking and despite the lack of an oven in her small kitchen in Taipei, she managed to thrill her family with treats like sponge cakes, apple pies, and creme caramel. The toaster oven got a real workout! In 1983 she moved to Fremont, California with her family, and her life became quieter. The traveling mostly stopped, but she found other interests. She and Henry bought a beautiful house and they put in much thoughts and energy turning it into a home. She even designed the window valances for the living room. Together they discovered an interest in gardening, and they transformed a barren backyard into a bountiful oasis. Many of their family and friends enjoyed the fruits of their labor. Their granddaughters especially looked forward to the apples and persimmons every year, claiming them to be much sweeter than the ones from stores. She also enjoyed karaoke singing and Chinese soap operas, and was active in the Hakka social organization. In addition, when her older daughter brought an orange tabby home, she surprised herself by discovering that she was a cat lover! She doted on the cat and took photographs of him, telling him he was a good cat. When a second cat joined the family, she was delighted to see the new pet loved sitting on her lap. She often responded by telling the cat how pretty she was. Ju-chu became a grandmother in 2007 when a longed-for granddaughter was born, and in subsequent years another granddaughter and a grandson followed. She relished being a grandmother, spoiling them with visits to restaurants on weekends and presents from Taiwan. They have fond memories of "the buffet with the chocolate fountain". She encouraged them to take piano lessons and enjoyed the artworks they made for her through the years. Although they have lost her early, her impact as a caring grandmother will persist through their lives. Ju-chu has had a full life as a devoted daughter, sister, wife, mother, and grandmother, as well as a good friend to many people. She is survived by her husband Hong-yee (Henry) Lin, her daughters Linda Yueh-ling Lin Lindley and Ellen Yueh-luen Lin, her sons-in-law Eric Lindley and Ted Haard, her brother Bill Tsai, her sisters Rushe Yang Tsai and Julie Liu, her brother-in-law John Liu, and her sisters-in-law Shu-mei Tsai and Michelle Tsai, as well as her granddaughters Annette and Nora Lindley, and grandson Adrian Haard. We miss her and are grateful for her time with us, and we wish her well as she continues her travels. The viewing is on Saturday March 13, 2021 at 1 pm, with memorial service to follow, at Skylawn Funeral Home & Memorial Park. It will be in an outdoor tent with social distancing protocols.

Ju-chu Tsai Lin passed away on February 19, 2021 after a long illness. She was blessed to transit onto her next phase at home peacefully. She was 85. Ju-chu, also known as Julia, was born on December 10, 1935. She was born in Hsinchu, Taiwan,... View Obituary & Service Information

The family of Ju-Chu (Julia) Lin created this Life Tributes page to make it easy to share your memories.

Send flowers to the Lin family.