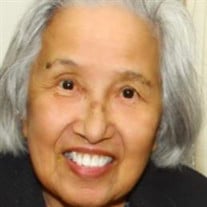 Josefina “Pining” Rustia Albano, 93, of San Francisco, CA joined her Creator on December 13, 2020 while her beloved family bid their goodbyes. Josefina was truly the heart of her family. She had a kind and generous spirit that was fostered in her childhood and deepened as she matured in life. Born on December 28, 1926, in the city of Manila, Philippines, Josefina was the eldest of six siblings. She spent her childhood traveling with her family to different towns and helped take care of her brothers and sisters. She learned to be an excellent cook from her mother and her love for helping the sick from her physician father. She earned her bachelor’s degree in Pharmacy at the University of Santo Tomas in Manila, where she graduated Cum Laude in 1949. She would later receive a Certificate of Merit and Appreciation from her alma mater in January 1974 in recognition of her exemplary and dedicated professional services to the community. Following her two-month internship after graduation, Josefina opened their family drugstore in San Jose, Nueva Ecija and was able to support her younger siblings through university. These years became the cornerstone of her life - an achievement she was able to reach through her discipline, dedication and determination. While employed in her father’s practice, she was introduced to Evaristo “Bert” Albano, her husband of 61 years. They were married on April 10, 1958 and became a stay-home mom blessed with two daughters. After raising her children in Manila, Josefina and Bert decided to relocate to the United States in November 1984. They eventually settled in San Francisco, CA, where she served her community as an active parishioner of St. Patrick’s Church along Mission Street. Josefina served as a Eucharistic Minister from March 1994-June 2010. She created and maintained a beautiful garden in her home full of orchids. She was an avid cook and baker; and together with her husband, she enjoyed entertaining relatives and friends from near and far with culinary specialties she was known for. Josefina was a loving and dedicated mother who was always there for her family with thoughtful advice, and unwavering support. Throughout the years, she cared for her nephews, nieces, and eventually, her grandchildren with the same compassion and warmth. Josefina was truly a “second mother” to many and made everyone feel instantly at home. As guests would say, “you always leave her home on a full stomach”. Those who will miss her dearly are her daughters, Marie Therese Locsin and Marie Anne Yupangco, son in law John Martin Yupangco, grandchildren Stephen and Linda, Katrina and Asumu, Kimberly, Kiara, Karlo, Christjan and Michelle, her younger sisters Virginia “Viring” Rustia-Paraiso and Leticia “Lety” Rustia-Miranda, her sister-in law Theresita “Nene” Sevilla-Rustia, her sister-in-law Francisca “Paquita” Albano-Calapini, nieces and nephews, close friends, and her neighbors in San Lorenzo Ruiz Center. She is reunited in Heaven with her husband, Evaristo “Bert” Albano, her parents Roman and Caridad Rustia, and siblings Roman “Totoy” Rustia, Serge “Eyong” Rustia, and Francisco “Paquito” Rustia. Funeral Mass will be held on Monday, December 28, 2020 at 1pm, followed by her interment at 2pm at Skylawn Memorial Park, Hwy 92 at Skyline Blvd., San Mateo, CA 94402. For the safety of everyone, there will be no funeral service outside of her immediate family due to COVID-19. A "Celebration of Her Life" event will be held when we are all safe to gather. Your prayers are very much appreciated.

Josefina “Pining” Rustia Albano, 93, of San Francisco, CA joined her Creator on December 13, 2020 while her beloved family bid their goodbyes. Josefina was truly the heart of her family. She had a kind and generous spirit that was... View Obituary & Service Information

The family of Josefina R. Albano created this Life Tributes page to make it easy to share your memories.

Send flowers to the Albano family.