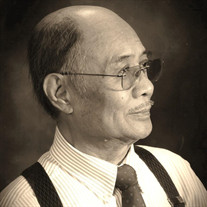 It is with great sadness that we announce the passing of Johnny C.W. Yeh, 88, on July 17, 2021, in Hercules, California. Johnny Yeh (葉肇文) was born on April 16, 1933 in Chia-Ting, Chiang-Su, China. He joined the Taiwanese Air Force in 1952 and served honorably as a Jet Fighter Pilot. In 1964 Johnny separated from service. From 1972 through 1975 he served as the General Manager/Director of Chevalier Shipping Co. While living in the United States, from 1976 through 1978 Johnny worked at Martha's Coffee Shop. Starting in 1978 he was a Ship Captain with the Foremost Maritime Corporation of New York. He served in this role until 1993. In 1994, Johnny became a Field Supervisor for Securitas Security Services and was a valued employee until 2004. Johnny has two beautiful children, Shirley Yeh and Tony Yeh, from his first marriage to Martha Yeh which ended in 2005. In 2009, Johnny lovingly joined Bessie Lin Yeh in marriage and became step-father to three more wonderful children, Kathleen Charvet, Karen Ku, and Michael Liu. His beloved siblings are Nelson, Philip, and Anna Yeh. In honor of Johnny's life, a Visitation and Funeral Service will be held on Saturday, July 24, 2021 starting at 10:00am at Skylawn Funeral Home in the Pacific Chapel (Hwy 92 at Skyline Blvd., San Mateo, CA 94402) Please reach out to Skylawn Funeral Home with questions or concerns regarding health and safety, parking and facilities, as well as questions about the Memorial Park. The hours of operation are Monday through Sunday, 8:30am-5:00pm. The Memorial Park hours are dependent on the season so please reach out to find the most up to date gate hours.

The family of Johnny C.W. Yeh created this Life Tributes page to make it easy to share your memories.

It is with great sadness that we announce the passing of Johnny...

Send flowers to the Yeh family.