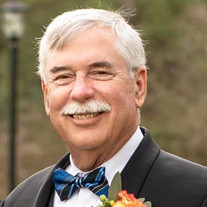 John Lyons, aged 66, passed away on April 20th, 2020 in San Mateo, CA with his family at his side after many decades battling ulcerative colitis and a final brave fight against colon cancer. Born in New Jersey on September 15th, 1953 to John Lyons Sr. and Dorothy Herron Lyons, John spent his childhood in King of Prussia, PA, graduating from Upper Merion High school. Upon graduating, he began his working career as an electrician. After several years of crawling around in steamy attics during the summer months he decided that he was indeed college material. He went on to proudly graduate from Millersville University, PA with a degree in Psychology and a Minor in Business. John’s passion in life was the stock market/financial industry and he rose through the ranks at his employer Norstar Brokerage, with a promotion taking him first to their Beverly Hills office and then to the San Francisco office. With the advent of Internet trading John moved from stock brokerage to personal financial consulting services, working at Griffin Financial, FN Investments, and Eureka Financial Services. In 1996 John veered off to a completely different career path and purchased a franchise of The Maids International, a residential house-cleaning service, which he managed for 20 years until selling the business and retiring in 2017. During his retirement his devotion to the financial world continued with endless hours watching the CNBC channel and operating a very active options trading account. His favorite phrase to yell after a good trading day was always, “Winner, Winner, Chicken Dinner!” In 1988, while taking a night class in Real Estate at San Mateo Community College, John met fellow student Laura Fumagalli who became Mrs. John Lyons on September 23, 1990. Son Gregory arrived in 1993 and daughter Emily followed in 1996. John cherished his family and greatly enjoyed the hundreds of hours spent watching the children’s school and sporting events. John was a loving husband and father and a generous and humorous friend. In addition to his wife/golf partner/travel companion of 29 years Laura Lyons and his two wonderful children Greg (Erin) and Emily, John is also survived by his sister Mildred Goggles (Gene), brother-in-law John Fumagalli (Sabrina), four nieces, three nephews and faithful border collie Rocky who greatly misses his walking buddy. So many of you have joined us on this journey sending so much food and offering so many kind words and prayers that we cannot begin to express our gratitude. We hope you will always carry him with you in your hearts as we will carry him in ours. John will be laid to rest at Skylawn Memorial Park in San Mateo, CA with a small, private internment ceremony. A Celebration of Life gathering for family and friends will be planned for a later date once the Corona Virus restrictions are lifted. In lieu of flowers/plants a donation in John’s name to the Crohn’s and Colitis foundation would be greatly appreciated. https://www.crohnscolitisfoundation.org/

John Lyons, aged 66, passed away on April 20th, 2020 in San Mateo, CA with his family at his side after many decades battling ulcerative colitis and a final brave fight against colon cancer. Born in New Jersey on September 15th, 1953 to John... View Obituary & Service Information

The family of John Daniel Lyons created this Life Tributes page to make it easy to share your memories.

Send flowers to the Lyons family.