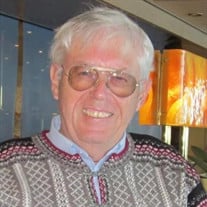 John William Jensen, 85, of San Mateo, CA passed peacefully at home while surrounded by his loving family on August 2, 2021. John was born on May 28, 1936 in New York City to Norwegian parents, Bjarne and Camilla Jensen. John grew up in the Bay Ridge neighborhood of Brooklyn and his father worked as an engineer in the Brooklyn shipyards. After the war and passing of Camilla, John’s father moved with his young son to Connecticut where John later graduated from Norwalk High School in 1953. Set on becoming an engineer, John worked his way through college, earning his Electrical and Electronics Engineering degree in 1958 at Northeastern University. John had wonderful memories of that time, living in Boston at the Nu Epsilon Zeta fraternity house. John then started his first engineering job at Raytheon Technologies in Burlington, MA. In 1962, John and his friend Charlie drove cross-country to California in John’s Oslo blue Porsche 356B roadster. John started what turned out to be a 27 year career at Litton Industries, in San Carlos, CA. Then, by the most incredible luck, a fellow Bostonian introduced John to UCSF nurse Janet Sullivan. She and three friends -- Teresa, Joan, and Cathy -- had also driven out from Boston that same year! The two married in 1965 and moved to San Mateo, CA, where they had three daughters. Across his career, John proudly belonged to the ranks of electron radar “tube guys”. He moved into sales and marketing while at Litton, then later at Thorn Microwave. This gave him the opportunity to travel and forge lifelong friendships with colleagues. It also gave John the opportunity to follow one of his passions, aerospace. John finished his career as a Senior Engineering Specialist at Loral Space Systems in Palo Alto, CA. John also followed his interests through his hobbies. He became very active in the Porsche Club when he moved to California, where he and Janet traveled to events and road rallies. At home, he built his own hi-fi stereo, television, model airplanes, satellite dish, and personal computers. He even tried his hand at wine making! He also enjoyed exploring the West with his family, visiting the coast, camping, and lots and lots of wine country trips. Retirement life was full of world trips with Janet, family time, good food and wine, following politics and reading WWII history. He took care to maintain friendships with colleagues over lunch and beers at his favorite spots like the Alpine Inn, Hot Wok Bistro, and his own backyard with a beautiful canyon view. John also took pride in his Norwegian heritage, spending years collecting information for his family tree and sharing this legacy with his daughters. He was a proud and beloved member of the Norwegian Club of San Francisco where he attended weekly dinners and other club events. John was married to the love of his life, Janet Sullivan, for 56 years. He is survived by his wife, Janet, daughters Victoria Grey, Jennifer Garbo, and Christina Jensen, granddaughters, Ellen and Lily Grey, and son-in-laws, James Grey and David Garbo. Services will be held on Monday, August 16 at 10:30 am at Skylawn Funeral Home and Memorial Park in San Mateo.

John William Jensen, 85, of San Mateo, CA passed peacefully at home while surrounded by his loving family on August 2, 2021. John was born on May 28, 1936 in New York City to Norwegian parents, Bjarne and Camilla Jensen. John grew up in the... View Obituary & Service Information

The family of John William Jensen created this Life Tributes page to make it easy to share your memories.

Send flowers to the Jensen family.