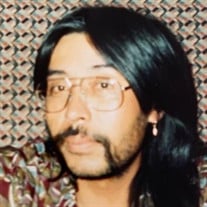 January 31, 1960 - June 17, 2020 John Joseph Franco passed away serenely on 6.17.20 at Contra Costa County Regional Medical Center after his battle with Colon Cancer. John was with his loving family, Chris Franco, Krystal Franco, Kathy Franco and his partner Brenda Baker and her mother Kathleen Baker, all who never left his side during his battle. John was born on 1.31.60 in Hong Kong, China to the late Irene and Joseph Franco. John moved to the US as a preteen and spent most of his life in the Bay Area in California. He attended La Salle school in Hong Kong China and went to high school at Sierra High School in San Mateo, CA. After high school, John spent a majority of his career as a professional "Big Rig" driver and continued this until the end of his time here. John loved to bowl and enjoyed playing softball. He also loved building cars, racing, cooking, taking care of his numerous fur babies, and being there for his family no matter what. He enjoyed working on cars with his son, Chris Franco, especially his Nissan 350Z he had until his passing. Chris is working to make sure the car will be built to the exact idea John had for it but did not get to complete himself. He also left a BMW as a project car for his children Chris and Krystal Franco to rebuild together. John loved music, ranging from Motown to Rap to Oldies, his taste was eclectic. John had an unconditional love for his family and close friends, and his genuine heart always showed through to all of those around him. John was a devoted loving father, husband, partner, grandfather and uncle and incredibly giving and selfless individual to all those that were lucky enough to meet him. His life was ended much too early by a terrible, irreversible disease. He fought hard with chemotherapy and sheer will power, but he is now at peace and out of pain in Heaven with all of his loved ones once more. John is survived by his estranged wife Kathy Franco, daughter Krystal Franco, son Chris Franco and grandson James, son John Butler and wife Midori, son Tony Trolesi and grandson Anthony, his partner Brenda Baker, Chris's fiancé Andrea Phillips and son Robby, mother in law Esther O'Reilly, brother in law Wayne Proctor and wife Lynn and their children Bobby,Nicholas and Jenna, sister in-law Patricia Butler, aunt Priscilla Hurlow and her children Mark, Phillip, Alex, Paul, Patricia and Maryanne, uncle Francis Hurlow & Pauline Burnell and their children Jeff and Joann, cousins Eugene and Steven Choy, uncle Dennis Jones and Aunt Elsie Ilahi and their children Jennifer, Carol, Christina, Angela, and Michael, brother Mike Franco and son Calvin, and his fur baby Buddy Baker. John was predeceased by his mother Irene Franco, his father Joseph Franco, and his brother Christopher Franco. His aunt Katherine Choy and uncle Benjamin Choy, and uncle Johnny Hurlow In lieu of flowers please consider a donation in John's memory to the Mayo Clinic as designated donation to Cancer Research. Donations can be made by visiting https://philanthropy.mayoclinic.org/. Service will be held at Skylawn Park Funeral Home and Memorial Park in San Mateo on July 3rd, at 11:00 AM.

The family of John Joseph Franco created this Life Tributes page to make it easy to share your memories.

Send flowers to the Franco family.