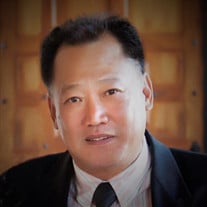 Jimmy Hoi To Lee was a beloved father, grandfather, brother and uncle, who passed away at the age of 72 from declining health due to cancer. Born on May 19th, 1948 (April 11th, 1948 on the Chinese Calendar) in Cho Lon, Vietnam, Jimmy was the third oldest child to father Quynh Ly and mother Giai Khong. Growing up, he did well in school and was especially talented in Math. Jimmy showed early signs of his entrepreneurial personality when he solicited live music performance opportunities in the U.S. Army base in Vietnam as a band lead and drummer. He was particularly fond of the music from the Beatles. Jimmy continued his business ventures when he moved to Hong Kong in the 1970s. At the initial innovation in the plastic industry, Jimmy established his first own business in reselling plastic parts. He later became a salesman for the then trending leather and mink apparel, and created a unique monopoly in Hong Kong for being one of the first local sellers selling tools and equipment for producing those luxury apparel. At the height of his business, he was a proud owner of his luxury apparel business, called Sunny Kingdom Trading Company, and was conducting businesses with partners from China, Japan, Germany, Greece and more. When Jimmy moved to the U.S. in the 1990s, he continued his luxury apparel business in Oakland Chinatown, where several other businesses including a Chinese restaurant were also established at the turn of the millennium. He later began devoting time to farmers markets and sold nursery goods, particularly lucky bamboo plants and money trees, and had opened up multiple outlets in the Bay Area. He cherished his chats and connections with customers, vendors and market managers at the farmers markets. Jimmy enjoyed traveling especially going on road trips with his two daughters. Some of the frequently visited destinations included Los Angeles and Las Vegas. They also had a blast exploring Mexico on a cruise, hoping from island to island in Hawaii, and visiting various parts of China including Shanghai, Beijing, Xi’an and more . In his spare time, Jimmy enjoyed watching Chinese history documentaries on the TV and playing Mah Jong in Oakland Chinatown. He was also a foodie, and some of his favorite food included Vietnamese cuisine, dim sum, steak and wine, and fresh seafood made in Chinese styles. Towards the last months of his life, Jimmy especially enjoyed the variety of home cooked food prepared by his favorite sister Susan. Jimmy is survived by two daughters - Michelle and Milan, two grandsons - Landon and Easton, and six siblings - Monica, Anna, Trenton, Susan, and Maggie in the U.S. and Tsui Kum in the U.K. Jimmy is dearly missed, and will be forever in our memories.

Jimmy Hoi To Lee was a beloved father, grandfather, brother and uncle, who passed away at the age of 72 from declining health due to cancer. Born on May 19th, 1948 (April 11th, 1948 on the Chinese Calendar) in Cho Lon, Vietnam, Jimmy was... View Obituary & Service Information

The family of Jimmy Lee created this Life Tributes page to make it easy to share your memories.

Jimmy Hoi To Lee was a beloved father, grandfather, brother and...

Send flowers to the Lee family.