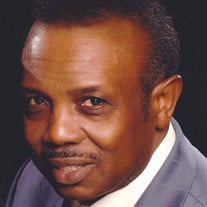 Jimmie Lee Baggett Sr. was born on the 24th day of October in 1949. He was born to Floyd Baggett and Ethel Mae Love in Jackson, Mississippi. Jimmie got his early education in the city of San Francisco at Emerson (1959) and Bret Harte (1961) Elementary Schools. He then attended Portola Junior High School and later graduated from Woodrow Wilson High School in 1967, before attending City College of San Francisco. Jimmie worked at Mt. Zion Hospital where he met the love of his life, Velma Jean Smith. After just three months of courtship, he knew she was the one for him, and they decided to tie the knot. Jimmie and Velma were married on April 22, 1972. From this union they raised four beautiful children. Jimmie furthered his education enrolling in night classes to study the trade of a sprinkler fitter. After 33 years in his career as a Foreman Sprinkler Fitter, he retired from the Sprinkler Fitters U.A. Local 483 and went on to become a Transit Operator for the Municipal Transportation Agency. He was not just any MUNI driver, but one of the best you ever rode with; and awarded “Driver of the Month” twice. After twenty plus years of exemplary service Jimmie retired from MUNI in 2010, at which time, he and his wife Velma devoted full time to their ministry for God. In 1973, Jimmie and Velma joined True Hope Church of God in Christ and he was as a devout member on the Deacon Board for over 40 years, in which he formerly served as Chairman and Vice Chairman of the Board. He also was the Head of the Witness Committee and was always a frontline solider in the streets trying to bring people to salvation. Jimmie was an active member of the Sick and Shut-in Committee. He was well versed in the Gospel and shared his knowledge as a Sunday School Teacher. Jimmie also was a Senior Usher and he worked with the Trustee Board. Jimmie was a pillar in the community as he worked with the Boys and Girls Club and was an inspiration to our youth! Jimmie passed on from this life on February 6, 2021, surrounded by his family and love ones. God said, “Well Done, Good and Faithful Servant.” His parents, Floyd Baggett and Ethel Mae Love and his brother, Lewis James Horne, preceded Jimmie in death. Jimmie is survived by his loving wife of 48 years, Mrs. Velma Baggett and their children, Kim Washington, son in law Kenneth Washington, Jimmie Lee Baggett Jr., Charles Michael Baggett and a special nephew Albert Starnes Jr., three grandchildren Jaylen, Tyjia, and Charlee Baggett along with a host of nieces and nephews who he had a part of raising. Jimmie also leaves to cherish his siblings Leon Horne, Sylvester Love and Josephine Love as well as a host of brother in laws, sister in laws, great nieces and nephews and his godchildren. We will truly miss Jimmie Baggett, but his legacy will continue to live on through the many lives he has touched. He has forever left an imprint on our hearts and souls.

Jimmie Lee Baggett Sr. was born on the 24th day of October in 1949. He was born to Floyd Baggett and Ethel Mae Love in Jackson, Mississippi. Jimmie got his early education in the city of San Francisco at Emerson (1959) and Bret Harte (1961)... View Obituary & Service Information

The family of Jimmie Baggett created this Life Tributes page to make it easy to share your memories.

Jimmie Lee Baggett Sr. was born on the 24th day of October in...

Send flowers to the Baggett family.