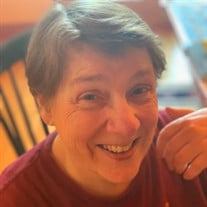 Jane Marie Todd of Portland, Oregon passed away on February 2, 2021. She was a 30-year resident of Portland. Jane was born in San Francisco, California to David and Dorothy Todd, the fifth of six children. She was raised in Millbrae, California, and attended local public schools, graduating from Capuchino High School in 1974. From a young age, Jane loved books, reading and literature. After graduating from high school, she received her bachelor’s degree in French from Linfield College and went on to complete her doctorate in Comparative Literature at the University of Oregon.  Jane spent several years in academia, and taught French, Humanities and Women’s Studies at Reed College and the University of Oregon. She started her own translation business in the early 1990’s, and worked as a free-lance translator for nearly 30 years, translating all different genres of books from French to English. She translated more than eighty books and hundreds of shorter texts for trade and university presses and art museums. Jane was well-respected in her field and received many awards for her translations, including the 2010 Translation Prize for Nonfiction by the French-American and Florence Gould Foundation for her translation of Dominique Charpin’s Reading and Writing in Babylon. Jane loved the ocean and the mountains and was lucky to live close to both. She attended many writing workshops at Cannon Beach, Oregon and frequently traveled to Sunriver, Oregon to spend time with friends and family. She was a devoted animal lover and loved her rescue dogs, Trixie and Lainey, dearly. Jane was predeceased by her parents, her brother, John, and her sister, Anne. She is survived by her sisters Kate Todd (Marty Lubin) and Ruth Assily (John), and her brother Stephen Todd (Evangeline). She was also the beloved Aunt Jane of three generations of nieces and nephews.  A small funeral service will be held at Skylawn Funeral Home on Monday, February 15, 2021 at 11:00 am. For information regarding a live stream of the service, please contact the family at [email protected]  In lieu of flowers, donations to Tony La Russa’s Animal Rescue Foundation are welcomed.

Jane Marie Todd of Portland, Oregon passed away on February 2, 2021.&#8239;She was a 30-year resident of Portland. Jane was born in San Francisco, California to David and Dorothy Todd, the fifth of six children. She was raised in Millbrae,... View Obituary & Service Information

The family of Jane Marie Todd created this Life Tributes page to make it easy to share your memories.

Jane Marie Todd of Portland, Oregon passed away on February 2,...

Send flowers to the Todd family.