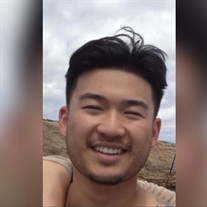 Not sure what to send?

With broken hearts and regrets: Isaac Liu, the beloved son of Cary and Doris Liu, loving elder brother of Kirk and Grant Liu, and the cherished grandson of May C. Liu, passed away on May 27th, 2022. He had a special bond with his grandma from the moment she held him when he was born. She helped raise him and they loved each other. This for 28 years of his life before Alzheimer's took her away when she was 100. Isaac was born on January 25th, 1992 at Sequoia Hospital in Redwood City. He was raised in San Mateo and attended Baywood Elementary, Borel Middle School, Aragon High School, and College of San Mateo. He lived life to the fullest and travelled broadly throughout the world and visited many cities and places in Asia, Southeast Asia, Europe, and North America. Growing up, he enjoyed and excelled in math, sports and games. He was clever, self-reliant, and optimistic. He was free-spirited, full of ideas, and sometimes with bit of nonconformist attitude. He had many exceptional qualities - intelligence, curiosity, empathy, with the most important ones being love and loyalty to family and friends. He braided it into everything that he did, and it is part of the legacy he leaves behind. Anyone who knew Isaac, knew that he was the genuine friend who always had your back when you were in need. He had an immense personality that embraced those he came in contact with, and he was always a source of positivity for others. He had been with us and many of you for the past 30 happy years, and had always felt he was a part of a large and extended family through the many friends that he had. The Lius wants to thank all those who showed kindness and friendship to him through the years for they know it meant the world to him that you and your family were part of his life. This brought him the most happiness and engendered the utmost joy and respect he felt for all of you. A lifelong friend said about Isaac: "He always had such a genuine spirit and charm about him that was so disarming. His light-hearted honesty and openness in conversation, whether it be about the joys or the pains of life, had a way of softening the people and situations around him. In the best of ways, Isaac brought his humanity into every room he walked into." All who knew him will miss him dearly. For those who knew him, take a moment to reflect on the remembrance of Isaac from years past - may it bring you a smile. Wish him well with your thoughts and prayers, that he is journeying God's heavens in peace and joy with his grandma and memories of all those who love him in this world. A funeral and interment service will be held on Saturday, June 25, 2022 at 10:00am at Skylawn Memorial Park in San Mateo at Highway 92 and Skyline Blvd. All who knew him are welcomed.

With broken hearts and regrets: Isaac Liu, the beloved son of Cary and Doris Liu, loving elder brother of Kirk and Grant Liu, and the cherished grandson of May C. Liu, passed away on May 27th, 2022. He had a special bond with his grandma from... View Obituary & Service Information

The family of Isaac Liu created this Life Tributes page to make it easy to share your memories.

With broken hearts and regrets: Isaac Liu, the beloved son of...

Send flowers to the Liu family.