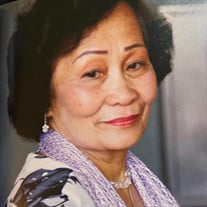 Iluminada was born in La Union, Philippines to Escolastica & Prospero Espiritu, Sr. on November 29, 1935. She was the oldest of 4, with her 3 brothers - Carlo Magno, Prospero Jr. & Ramon Sr. - following soon after. They grew up in Bauang, La Union and she attended Christ the King College for high school. After attending vocational school, she went on to become a seamstress and a secretary at the Public Attorney's Office in Urdaneta City, Pangasinan. Iluminada married Isidro Picardal in 1964 and gave birth to her only daughter, Marcela, in 1965. Iluminada & Marcela immigrated in 1967 to join Isidro in the U.S. Once in the Bay Area, she was hired by Hewlett-Packard to assemble their PC boards in the '70s-'80s, and was eventually offered early retirement. After HP, she received her CNA license to become a home health aide, all while helping take care of her grandchildren. Her beloved Isidro passed on January 17, 1983, whom she will rejoin at Skylawn Memorial in their final resting place. Iluminada is preceded in death by her parents & 3 younger brothers. She is survived by her daughter, Marcela (Irwin), her 4 grandchildren - Chelsea (Eidref), KC (Justin), Jon & Crystal - and many other extended family members including her niece, Bernadette (Robert), and their children Athena & Anthony. "Grandma Lu" was an independent, hard-working, and overall charismatic person and was loved by all who had the great fortune of meeting her. Her energy and presence will be missed immensely and never forgotten. To ensure the health and safety of our community, we are following all guidelines set by local, state and CDC officials. If you are planning on attending a service, please contact the funeral home in advance, so that we can plan accordingly. To send flowers or a memorial gift to the family of Iluminada E. Picardal please visit our Sympathy Store

Iluminada was born in La Union, Philippines to Escolastica & Prospero Espiritu, Sr. on November 29, 1935. She was the oldest of 4, with her 3 brothers - Carlo Magno, Prospero Jr. & Ramon Sr. - following soon after. They grew up in Bauang, La... View Obituary & Service Information

The family of Iluminada E. Picardal created this Life Tributes page to make it easy to share your memories.

Iluminada was born in La Union, Philippines to Escolastica &amp;...

Send flowers to the Picardal family.