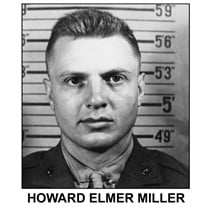 On April 30, 2020 The DPAA announced that Private Howard Elmer Miller of San Mateo, CA, has been accounted for as of 30 March 2020. Although born to Walter and Josephine Miller in Grand Rapids, Michigan on May 6 1921, the future Marine spent much of his childhood in Chicago alongside his siblings, Wally and Charmaine. The family relocated to San Mateo County in the mid 1930s - Walter, a traveling silk salesman, was made western manager for the Belden-Hemingway importers - in time for Howard to enroll as a freshman at San Mateo High. He excelled at football both in high school and at San Mateo junior college and was reportedly "a highly popular member of the local younger set" in San Mateo and Burlingame. After finishing school, Howard worked briefly in two very separate industries- silk sales with his father, and Bethlehem Steel in San Francisco - before volunteering for the Marine Corps on August 31, 1942. He was sent to San Diego for boot training. In October, Private Miller requested and received a four-day furlough to travel back to San Mateo; he married Elizabeth "Betty" Jane Bettinger at St. Matthews Catholic Church on the 24th. The couple enjoyed a brief honeymoon before Howard's leave expired and he returned to San Diego. Private Miller's first assignment was training with the heavy howitzers of the 12th Marines, the artillery regiment of the 3rd Marine Division at Camp Dunlap. In January of 1943, he switched specialties and attended tank school at Camp Elliot. Learning to operate and maintain a tank took several more months, so Betty moved down to San Diego while her husband was in training. When he finally shipped out in June, Betty went back home to San Mateo, anxiously awaiting news. On July 18, 1943, Private Miller finally arrived at the camp of the 2nd Tank Battalion, 2nd Marine Division. Strangely, after all of his training, he was only with the tanks for about six weeks. At the end of August, Miller was transferred to Company A, First Battalion, 6th Marines - a rifle company in an infantry regiment. The reasons for this decision aren't known, but Miller did not seem to overly mind. He set about learning the trade of yet another branch of the Corps, and found time on the weekends to visit some family friends in Wellington. In a letter that arrived shortly before his fist wedding anniversary, he reported that he was "OK" and referenced the date of November 5th - but whatever he meant to say was removed by the censor. The next word received came from the Navy Department on New Year's Eve 1943. Howard had been killed in action somewhere in the South Pacific. More information would be forthcoming. His family and his wife had no idea where he died; their best guess was somewhere in the ongoing Cape Gloucester campaign. They didn't immediately connect their loss to the brutal battle of Tarawa, fought the previous month. Howard Miller lost his life on November 22, 1943 to gunshot wounds in the head. He was buried on the island of Betio in an isolated cemtery marked on a map with coordinates "KH 283072." Several other Marines from his battalion were interred nearby. The site was never officially marked, and when Betio became a naval base, any individual markers were destroyed. The bodies there were declared non-recoverable. The DPAA is reporting that Private Miller was found in "Row D" of Cemetery 33, a location discovered and excavated by the non-profit group History Flight. While Miller was not on the original burial roster for the row, it is known that several unidentified Marines were buried there, and it is likely that one of these has now been connected with his case. Howard Miller was officially accounted for on April 20, 2020. Welcome home, Private Miller. Semper Fi. Howard E. Miller

On April 30, 2020 The DPAA announced that Private Howard Elmer Miller of San Mateo, CA, has been accounted for as of 30 March 2020. Although born to Walter and Josephine Miller in Grand Rapids, Michigan on May 6 1921, the future Marine spent... View Obituary & Service Information

The family of Howard Elmer Miller created this Life Tributes page to make it easy to share your memories.

Send flowers to the Miller family.