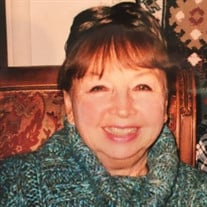 Gloria (Gigi) Stupfel was born Gloria Martha Clorinda Mardus, became Gloria De Nike and then Gloria Stupfel. She died on March 11, 2021, just two months shy of her 95th birthday. She is survived by her husband of 50 years, Donald Stupfel, daughter Lisa Whitehead (Gary), son John De Nike (Barbara), daughter Gretchen Irion (Brian); Don’s children daughter Donna Smith (Michael), son Geoffrey Stupfel (Ylia) and daughter Kristin Edlinger (Heiko), along with 12 grandchildren and 1 great grandchild. She was preceded in death by Donald’s son Thomas Stupfel. Gigi was born in Elizabeth, New Jersey on May 22, 1926. She lived in New York as a child, New Jersey in her teens, Arizona for college, had a brief stint back in New York and then remained in California for the rest of her life. She graduated with a BS in Biological Science and spent her professional career working as a Clinical Laboratory Scientist in labs and hospitals. Gigi received an MS in Health Science in the mid-70s and taught laboratory sciences at Skyline College. She also held a teaching credential for grades 7 through 14. She was an Assistant Director of Safety Programs for the Golden Gate chapter of the American Red Cross where she assisted the department secretaries with technical information, met with city police chiefs, fire department instructors and P.E. teachers. She also taught first aid and water safety instruction. She loved to swim and belonged to the San Mateo Marlins Masters swim team with husband Don. They traveled all over the United States to participate in competitive swim meets. She won scores of medals and ribbons over the years. She was ranked in the top ten in the country from 1993 to 2007 in her age group. Some of the more notable events included an international meet at Stanford University in 2006 where she earned six medals, and at the 2008 US Master’s Short Course National Championship in Austin, Texas where she won 5 first place medals when she was 82 years old. Family genealogy and history were important to Gigi. She kept historic photographs and compiled albums for her children, along with many stories and anecdotes. Gigi loved being a mother and a grandmother. She belonged to book clubs, wrote about her family and herself and wrote poems and children’s stories. A copy of her autobiography is posted on the Skylawn Funeral Home website. Gigi and Don were very gregarious and social, and Don still is. They always made friends wherever they went. Gigi was a lively character and liked to dress flamboyantly. She was always health conscious and kept in fantastic shape throughout her long life. In lieu of sending flowers, please consider a donation to the American National Red Cross. Agenda Schedule: 12:30 to 1:00 – Guests Arrive 1:00 to 2:00 – Funeral Service 2:00 – Burial

Read the story of Gloria Stupfel’s life with an autobiography she wrote in 2009 and dedicated to her family.

Send flowers to the Stupfel family.