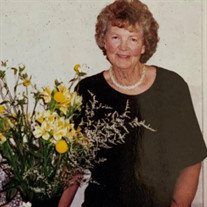 Gertrude K. Gamborg, aged 97, passed away peacefully on May 28, 2021. Gertrude (Trudy) was the daughter of Axel and Olga Christensen, both of whom were immigrants from Norway. She was born on May 26, 1924, on the family farm at Buffalo Lakes, Alberta, Canada. Life on the farm was not easy, but Trudy fondly remembered her older brother making cross country skis and the smell of freshly cut wood and grass. Even though she preferred to be outside, she was often asked to work in the kitchen while her younger sister worked in the field. She attended a one-room school named Canor (Canadian/Norwegian) where one teacher taught approximately 20 students, varying in ages from 7-16, grades one to nine. She received her high school by correspondence, then attended Camrose Lutheran College for Business Administration. She held various secretarial positions in Edmonton, Alberta until her marriage in 1953 to Oluf L. Gamborg, who had immigrated to Canada in 1949 from Denmark. Trudy and Oluf had their first child, Brian, in 1955, then moved to Saskatoon, Saskatchewan in 1958 where they had their daughters, Cheryl and Linda, and raised their family. The family attended Zion Evangelical Lutheran Church where Trudy taught grade two Sunday School for many years. Trudy hosted many out-of-town family gatherings, which often included picnics at the Saskatoon Forestry Farm. The family camped for three weeks each year in summer, often in the Okanagan Valley in BC, where she and Oluf later purchased property. She loved time spent with family and on trips, despite all the work involved. Trudy and Oluf moved to Belmont, California in 1979 where they would reside for the next 42 years. The couple were active long-time members of Hope Lutheran Church in San Mateo. They shared a love of horticulture, as demonstrated in their beautifully landscaped home which they cared for together. They would often make day trips to Napa Valley, Muir Woods and Lake Berryessa for picnics, and would enjoy pastries and smorgasbord at Danish bakeries. When family came to visit, the Sea at Carmel was a favourite trip for both the beach and shopping. They also kept up on the lives of celebrities and the royals through People magazine. Trudy had a knack for living a rich lifestyle without breaking the bank. While shopping at Nordstrom, she would stop to listen to the live pianist. To enjoy the beach while keeping her hair well-coiffed, she would have coffee and cookies in the lounge of the Ritz Carlton overlooking the sunny shoreline. She delighted in dressing fashionably and would have Oluf chauffer her to the mall where she would peruse the clearance section of Chicos or people-watch. This people-watching continued even into her short stay at an assisted living facility, where she would come early for meals to watch people arrive, including the “parade of wheelchairs” as she jokingly called it, and dine with her friends at their usual table. Trudy delighted in decorating, crafting, baking, gardening, and everything else involved with being a homemaker. She collected objects of beauty which she displayed in her home. She made braided rugs, needlepoint, cross-stitch, petit point, and quilts. She avidly read books by Lauraine Snelling. Even into her nineties, she would tend her garden, growing a variety of trees, shrubs, and flowers, and welcoming hummingbirds and songbirds, as well as some uninvited guests like deer and the odd racoon. She loved visits from her eight grandchildren, which included sleepovers, pool time in the backyard, playing at the schoolyard across the street, baking her mother’s recipes, and watching both heart-wrenching and heart-warming classic movies and musicals. Despite becoming an American citizen in 1989, Gertrude retained her love for Canada. She had calendars with images of canola and wheat fields, grain elevators, and the Canadian Rockies, and loved seeing pictures from relatives of trees, homes, and streets blanketed in snow. In her later years, especially, she would delight in recalling the beautiful sights and smells of the Canadian prairies. Trudy is survived by her three children, Brian Gamborg (Joyce), Cheryl Kirchmaier (Calvin Gosling), Linda Barghi (Kavous); grandchildren Leiflyn Gamborg (Drew Hood), Carly Friesen (Nathan), Dana MacCallum (Adrian), Elijah Kirchmaier (Erin Rees), Carson Kirchmaier (Delaney Evans), Ryka Ributzka (Jürgen), and Ramin Barghi (Jenevieve Vartanian); great grandchildren Emmett Friesen, Silas Friesen, Archer Ributzka, Adelaide MacCallum, Talia MacCallum, and Sullivan Kirchmaier; younger sister, Betty Anderson; sister-in-law Esther; and cousins, nieces, and nephews. She is predeceased by her husband Oluf Gamborg (May 28, 2007), grandson Erik Gamborg, older brother Alex Christensen, half-brother Leo Rutledge, brother-in-law Raymond Anderson, and sisters-in-law Isabelle Christensen and Ethel Rutledge. She was, and remains, deeply loved by family and friends. We will miss her terribly.

Gertrude K. Gamborg, aged 97, passed away peacefully on May 28, 2021. Gertrude (Trudy) was the daughter of Axel and Olga Christensen, both of whom were immigrants from Norway. She was born on May 26, 1924, on the family farm at Buffalo Lakes,... View Obituary & Service Information

The family of Gertrude K. Gamborg created this Life Tributes page to make it easy to share your memories.

Send flowers to the Gamborg family.