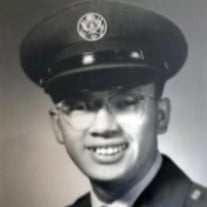 George Lee, 87, of Menlo Park, CA, passed peacefully into heaven on August 30, 2021. He was born in San Mateo, CA, on November 26, 1933. He graduated from San Mateo High School and San Jose State University with a bachelor’s degree. He entered the Air Force in 1955 and served as an Air Weather Service Observer – forecasting weather for military airfields and hunting for hurricanes. An interesting fact was that his eldest brother, Harry (an Air Force 1st Lieutenant) was the Authorizing Officer to authenticate him. George’s last duty was with the 9th WEARON Weather Squadron of the Military Air Transport Service at the Dyess Air Force Base in Abilene, Texas. He received the Good Conduct Medal in 1958 and was honorably discharged in 1963. As a Veteran who served in the Air Force for 8 years, he was very technical and hands-on. He held various jobs, including being a TV repairman. George was a gentle and resourceful man, who was conscientious about conservation. While being semi-retired, he was an environmentalist, and recycled most everything. He was also an avid fisherman who brought his poles to the shorelines and boats, freshwater and saltwater, at streams, rivers, lakes, reservoirs, and deltas. In his later years, he even began to learn flyfishing. His love for fishing and conservation were shared by his many nieces and nephews. Although the cleaning was challenging at times, we enjoyed the benefits. He is predeceased by his parents, Fook and SooHoo Shee Lee; his 5 siblings and some of their spouses: Harry (& Michiko) Lee, Robert Lee, Rose (& Shew) Louie, John (& Lillian) Lee, and Mary (& Gene) Ngow; and his beloved niece Tracey Lee. He is survived by his sister-in-law, Jane Lee (spouse to Robert Lee) along with his 15 nieces and nephews: Marcy and Russell Lee and their families; Jane, Janet, Jean Wong, Richard, Donald, Geoffrey, Steven, and Jenny Yip Louie and their families; Michael and Matthew Lee and their families; and Debbie, Lena Tung, and Edward Ngow and their families. The Funeral will be held on Friday, September 10th at 2:30pm at the Skylawn Memorial Park, Mausoleum, Rt. 35 at Hwy. 92, San Mateo, CA 94402, 650-227-3142, skylawnmemorialpark.com.

In Memory of George Lee

Send flowers to the Lee family.