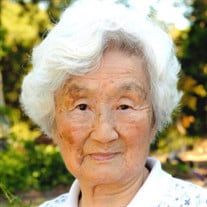 Gen Tang Shia was born on June 20, 1925 in Shanghai, China to her mother Chang Hui Ching and her father Shia Xi Pung. She had two older sisters, an older brother and a younger brother. When Gen Tang was five years old, she took a boat with her family to Beijing where she spent her early childhood before moving to Nanjing at the age of 10. As a young girl and adolescent, she was an avid softball player and excelled in many sports. She was active, clever, and her curiosity led her to be adventurous. During WWII, when Japan invaded China and pushed close to Nanjing, Gen Tang, then a high school kid, followed her family and moved to Guayang, Guazhou. She finished high school there and went to Chongqing for college. At that time, most of the universities relocated to Chongqing following the government's relocation. Gen Tang passed the entrance exam of Nanjing Central (Zhong Yan) University at Sa Ping Ba, Chongqing. It was at this university where she met her husband Lien Yang. In 1947, Gen Tang received a job offer to teach in Taipei, Taiwan where she moved with her husband. After years of teaching at Taipei Second Woman High School, Da Hwa Junior School, Da An Junior School, Gen Tang had her longest tenure at Fu Hsin Junior High School where she retired after 10 years of teaching. She garnered love and respect as a teacher and her students continued to keep in touch with her even after 50+ years. Gen Tang and her husband moved to the United States in early 1982 to help her son Ming Yang and his wife Sunny Yang take care of their newborn daughter, Annie Yang. It was a big shift from living in a bustling city to the desert suburbs of Arizona. Nevertheless, she adapted and was a loving mother, mother-in-law and grandmother. Gen Tang was a life-long learner. She was adamant about learning English and carried around an English and Chinese dictionary to learn new words. She wrote letters, cards, song lyrics, and even emails to her family. She traveled the world, visiting more than 40+ countries. Gen Tang was a big fan of the NBA and was often glued to the television watching her favorite game, basketball. Her grandchildren will always remember the time they brought her to two Golden State Warriors games. For many years, she took the bus to attend her local senior program to socialize with friends, take ESL classes, paint, as well as play ping-pong and participate in line dance. She was a member of Friendship Agape Church near her home in San Jose where she met many kind friends and found her love for God. She took great care to make home cooked meals for her children and grandchildren and the taste of her beef noodle soup, fen zen rou, zha jiang mien and stir fry green beans will always be remembered. Gen Tang was instrumental in the lives of her children and grandchildren; her values and kind spirit have directly shaped who they are today. She is survived by her son Ming Yang and her daughters Charlotte Lin, Natalie Liess, and Youlin Young. She is survived by her six grandchildren Annie Yang, Christine Toruno, Daniel Yang, Risa Lin, Frances Kelly Lin, and Teresa Hooper. She is survived by her great grandchildren Oliver Jamil, Kate Jamil, Cara Toruno, Chloe Toruno, and Lucy Ellie Mejeritski.

Gen Tang Shia was born on June 20, 1925 in Shanghai, China to her mother Chang Hui Ching and her father Shia Xi Pung. She had two older sisters, an older brother and a younger brother. When Gen Tang was five years old, she took a boat with her... View Obituary & Service Information

The family of Gen Tang Shia created this Life Tributes page to make it easy to share your memories.

Send flowers to the Shia family.