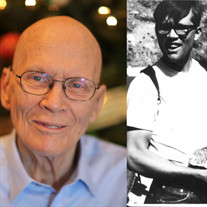 Dad believed deeply in the sacredness of self determination and free will. He believed every person has the daily responsibility to question and steer the trajectory of their own lives. The man that he became was the result of constantly working on the quality of his own character throughout his entire life. Gary Frank Lawyer was born to Bruce Adams Lawyer and Margaret Evelyn Rice in Wenatchee, Washington on April 26, 1944 as the second of three sons: Michael, Gary and Phillip. Gary was baptized with his brothers on August 2, 1953 into The Church of Jesus Christ of Latter-Day Saints in Lake Spenard, Alaska. On October 30, Gary joined Michael on the other side, where they are still waiting for Phillip, much as they did in life. Besides his biological parents, Gary was greatly influenced and loved by his late step parents Frank Parry and Shirley Ann Lawyer, and his four other surviving siblings Randy Lawyer, Mark Lawyer, Ann Nelson, and Robin Lawyer Solman. When growing up, Gary enjoyed the outdoors, camping with his father and wrestling at Brigham Young University High School. He passed these loves to his children via campouts in frosty mountain ranges, free-for-all wrestling matches on the home carpet, and watching the kids compete on the mat. He encouraged his children to push through hardship to accomplish their dreams and to resist any relegation to a character in another’s story. Gary began his service in the United States Army in 1961 with tours in Germany, Cambodia and Vietnam while attached to an Intelligence unit. He now joins his friends listed on the Vietnam Memorial Wall. It is during this time Gary met an Army Officer who helped him change his life forever, as he chose to re-engage with his faith and get his GED. He returned and studied at BYU in 1964, where he earned a BS and MS in Geology. He discovered his life-long love of geology in an elective Volcanology course, after many previously futile attempts at deciding on a major. He even flirted with a theater major at one time (we think there must have been a cute girl involved). Gary was proud of his distinction of being one of the last applicants accepted to the university lacking a high school diploma. One of his professors once remarked the chess club often took up too much of Gary’s time, and judging by the amount of chess Gary played through his entire life, he didn’t listen to this advice. While studying for his degrees, Gary married Bobbie Kristine Carlyle on September 7, 1968. They were blessed with seven children, but cursed themselves to frustration by starting all their names with the letter “J”: Kyrk “Justin” Lawyer, Jennifer Kristine Crosby, Jared Forrest Lawyer, Jessika Francyne Lawyer, Joshua Carlyle Lawyer, Jacob Howard Lawyer and Jonas Adams Lawyer, who in turn gifted their parents twenty one grandchildren (only 3 of which start with the letter “J”!). Following the completion of his Masters Degree in a single year and the births of Justin and Jennifer (also in a single year, plus 3 weeks!), Gary accepted a job with Exxon in New Orleans, Louisiana, where he served as a Bishop in a local LDS branch, worked on oil rigs in the Gulf of Mexico, and added Jared and Jessika to the growing family. They often tied a rope to Jared in stores to keep him from fleeing. Joshua was added after moving to Fountain Valley, California, as Gary continued his work with Exxon, until moving to Parker, Colorado in 1978, where they settled for a while and welcomed Jacob and Jonas. In Colorado, Gary loved skiing, continued to humble his children in chess and showed racquetball opponents how an “old man controls the court.” Gary was an active entrepreneur, starting several successful companies in the oil and gas industry throughout his life, sometimes even bootstrapping his oil exploration companies from the home. Justin still remembers with fondness sneaking into the home office and printing out seismic and well logs from old microfiche cards and tapes when dad was looking the other way. In 1997 Gary was married to Patricia Webster in the St. George temple, relocating to Utah and adding her six children to his own list of seven, until their separation. In January 2018, Gary moved in with his eldest son, Justin in Menlo Park, California. He still played a mean game of chess and enjoyed drives through the redwoods and along the beach until the end, despite struggles with diabetes and dementia. Perhaps now he can find an adversary worthy of his chess skills, and drill that one last well he still dreamed of. We love you, Dad! Until we meet again!

Dad believed deeply in the sacredness of self determination and free will. He believed every person has the daily responsibility to question and steer the trajectory of their own lives. The man that he became was the result of constantly working... View Obituary & Service Information

The family of Gary Lawyer created this Life Tributes page to make it easy to share your memories.

Dad believed deeply in the sacredness of self determination and...

Send flowers to the Lawyer family.