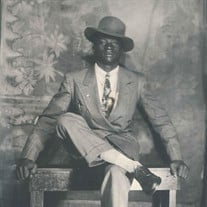 Frank Bracey Evans was born on April 8th, 1927 in Burkeville, Alabama to Cupit and Rose Anna Bracey- Evans. He was one of fourteen children of which six reached adulthood. Frank accepted Christ at a young age, as the family attended Mt. Canaan Baptist Church in Burkeville, where his father was the lead Deacon, and a strong leader within this church and the broader community. He attended Burkeville Elementary school in Lowndes County, which only went to the 8th grade, after which, Frank and his brothers were sent into the fields as part of their Dad’s Sharecropper business. Frank loved to tinker and assist his Dad in repair of farm equipment. Frank worked in the fields into his early 20’s, then married his childhood sweetheart, Elizabeth White in 1947, and soon after followed his brothers to San Francisco to seek a better life. Frank joined St. Johns Missionary Baptist Church in San Francisco in the early 1950’s, and often attended services with his brother West. Frank spent most of the past 30 years in his 2nd home in Windsor, CA, where he became an integral member of the Santa Rosa community. He assisted in the building of their first local school and fire house, as Frank owned the land which he sold to the city of Windsor. But he took special pride in the huge park across the street from his home, as he moved huge boulders from Candlestick Park in San Francisco, and relocated them to Keiser Park, where they stand as a testament to his concern for the kids in the Windsor community Frank was a hard-working man, who became a welder at an early age, and truly loved his craft. He worked for Acosta Scrap Metal and Iron in San Francisco, where he was a Supervisor, but also constructed metal container boxes for large haul trucking applications. Frank liked to work with his hands, as he built an additional room on his home, as he also worked in construction early in his career. He loved to buy and repair antique vehicles, which included tractors, but his favorites where his two Red 1964 Ford Rancheros which he drove with pride well into his late 80’s. He was preceded in death by four brothers, Flem Jr., James, West, Cupit, and two sisters Alma & Hannah, and leaves to cherish his memories a host of Nieces, Nephews, Great Niece & Great Nephews, and host of extended family and friends

Frank Bracey Evans was born on April 8th, 1927 in Burkeville, Alabama to Cupit and Rose Anna Bracey- Evans. He was one of fourteen children of which six reached adulthood. Frank accepted Christ at a young age, as the family attended Mt. Canaan... View Obituary & Service Information

The family of Frank B. Evans created this Life Tributes page to make it easy to share your memories.

Send flowers to the Evans family.