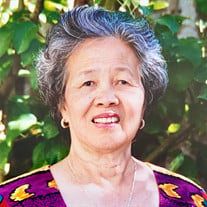 Flora Maria Acorda was born in Kahuku, Oahu, Hawaii on August 18, 1926, by a Farmworker father and a housewife, Laureto and Timotea Acorda, from Bacarra, Ilocos Norte, where the wave of farmworkers was recruited from the Philippines to work in the sugar cane plantation in Hawaii. She had two siblings, Emilio, and Mary. Flora, and her brother Emilio, went back to the Philippines at an early age (together with their mother Timotea). They were raised and grew up in Bacarra, Ilocos Norte. Flora started a small business, a barrio sari-sari store (tiange). She had a stall at the marketplace (tindahan) and would go and sell at the market every Tuesday, Thursday, and Saturday. She was a retailer for the farmers who would bring their fruits and vegetables. She had a small Food and Candy store at the school for the longest time. It was profitable that she was able to support the family. She was a happy honest woman. She was a very nice helpful and loving woman. She was liked by everyone, has a sweet smile, and never argue with anyone. Although she was tough and resilient, she endures hardships. She would go fishing during stormy days in the river and catches a lot of fish and shrimps. She would go and gather firewood after the storm in the river. She taught her son how to fish on the farm at an early age. She would wake up Benny at 5:30 in the morning to ride in a jeepney to go to Laoag City to buy assorted bread at the bakery and bring it back before school starts to sell at the school grounds. In 1971, Flora and her mom came to her birthplace, the USA to join her family. She worked at a care home facility for a year. Then work at Hilton Tower Hotel in San Francisco, for 6 years as a housekeeper. Two years after, she and her son moved to Milpitas, then to Redwood City. She worked at National Semiconductor in Sunnyvale, as an IC fab assembler. She is very hardworking, punctual and she never missed work, any absences except she calls in sick and absent because the freeway was blocked and detoured and could not find back to the freeway and work on time. After several hours circling, she finally found back the freeway and went home. She retired from National Semiconductor. She needed something to do, she became a babysitter for the neighborhood. She went to the Philippines for a year. Traveled to many places and came back and move with her niece Brenda and her family in Northridge where she enjoyed babysitting and gardening. Once, she's back in the area, she worked for a couple of years at YMCA in Cupertino as the Childcare for the school. Her final residence was in Hayward, she lived there for 9 years. On May 9, 2020, during the Pandemic, she was diagnosed and prognosis of end-stage renal failure for days to a few weeks. Her son brought her home since no one was accepting patients during the pandemic. After 14 months, the body was getting weaker and weaker, spoon-fed and the kidney could not function, with pain and affected the entire system but the mind still remembers every detail in her life. On July 9, 2021, at 94 years old she died in her sleep. (Just short of 40 days on her 95th birthday). Rest In Peace. We will miss an honest, loving, caring, helping hand, tough and resilient woman, very independent, fun, and always happy and smiling. For her no mountain is unconquered, nothing was impossible for her. She will be missed.

Flora Maria Acorda was born in Kahuku, Oahu, Hawaii on August 18, 1926, by a Farmworker father and a housewife, Laureto and Timotea Acorda, from Bacarra, Ilocos Norte, where the wave of farmworkers was recruited from the Philippines to work... View Obituary & Service Information

The family of Flora Maria Acorda-Dulay created this Life Tributes page to make it easy to share your memories.

Send flowers to the Acorda-Dulay family.