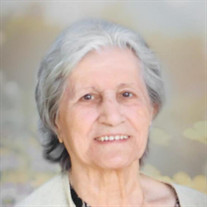 Faridah Chahrestan, beloved mother, grandmother and great-grandmother, passed away on Friday, February 26th 2021 at the age of 98 years old. She was born March 21, 1922 to Habib and Habbu Shilazi, in Mardin, Turkey. She is survived by her four children, eleven grandchildren and five great-grandchildren, whom affectionately called her “Taeta”, and whom she adored more than life itself. At the age of 20, Faridah married her husband Karim Chahrestan, a tailor. She was widowed at the young age of 30. Faridah was very devoted and traditional. She wore black for five years after her husband’s passing and supported her family by working from home as a seamstress. Faridah made beautiful clothes from hand. She could patch-up any tear with her needlework, and could even thread a needle into her nineties. She also crocheted, cross-stitched and embroidered exquisite works of art, which are cherished by her family. Faridah prayed to Jesus every day. She was raised in the Syrian Orthodox faith, like her husband, and she had a deep reverence for God and the Church. Faridah was a survivor. She lived through many wars, and bravely navigated her way from Turkey to Syria when the borders were closed. When her husband became ill, the family moved to Lebanon for better medical treatment. By the time the civil war started, Faridah was a widow. She moved to California to escape the war and settled in San Mateo, where she lived for the majority of her life. In 1998, Faridah became a U.S. Citizen. She studied hard to pass the test, and learned English quickly thanks to her favorite soap operas on TV. Faridah was the best grandmother. She showed her love with food and warm hugs. Her main desire in life was for her family to be happy - she always had her family in her prayers and thoughts until the end - nothing else came first. Faridah was immensely generous, joyful, loving and full of life. She was a fighter too, and strong. After having a stroke in November 2019, she fought and stayed alive for her loved ones as long as she could, pushing through the pain. Faridah was an angel on Earth, and now she is an angel in Heaven, reunited with her husband, sisters and brother. She will be fervently missed and loved forever.

Faridah Chahrestan, beloved mother, grandmother and great-grandmother, passed away on Friday, February 26th 2021 at the age of 98 years old. She was born March 21, 1922 to Habib and Habbu Shilazi, in Mardin, Turkey. She is survived by her... View Obituary & Service Information

The family of Faridah Chahrestan created this Life Tributes page to make it easy to share your memories.

Send flowers to the Chahrestan family.