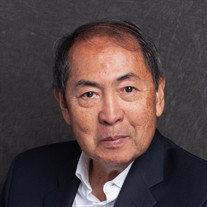 Edralin “Ed” Maduli was born on May 16, 1944 in Batac, Ilocos Norte in the Philippines. The eldest of four siblings, Ed was a decorated military veteran and a highly respected longtime educational leader in the California Community Colleges. He departed peacefully on June 12, 2022 after a difficult battle in the hospital. Son of a Philippine Scouts WWII veteran and U.S. Army serviceman, Ed immigrated to the United States with his family at a young age, living in New York City, Monterey, Hawai’i, and Salinas, California. There he was among the first wave of Filipino American students to attend Hartnell College in the early 1960s before transferring to Cal Poly San Luis Obispo where he earned his B.A. in aeronautical engineering. He went on to earn an M.S. in aeronautical engineering at University of Oklahoma and an M.B.A. Golden Gate University, and was working toward his Ed.D. in educational leadership at University of Southern California. Ed served in the United States Air Force for over 20 years, retiring with the rank of Lieutenant Colonel. His service in the military included assignments across the United States, Thailand, Germany, and Operation Desert Storm in Saudi Arabia. As an officer in the areas of research and development, logistics, and aircraft maintenance, he notably supported the development of the F-117 Stealth Fighter. He was a graduate of the military’s Armed Forces Staff College, Air Command and Staff College. After retiring from the Air Force in 1994, Ed transitioned to a prolific second career in higher education which included administrative leadership positions at Las Positas College in Livermore, California and San Luis Obispo Community College District. His last and longest tenure was as Vice Chancellor of Administrative Services at West Valley Mission Community College District in the San Jose area. Upon his retirement in 2019, he was selected by the Association of Chief Business Officials (ACBO) as the recipient of the Walter Star Robie Award for having demonstrated outstanding achievements and exemplary service as a chief business officer in his respective districts. Even after retiring from his second career, Ed stayed active as an elected representative of the Board of Trustees of the Chabot-Las Positas Community College District where he served since winning a seat in 2016. During his tenure, he twice served as president of the board. Ed is remembered for his fiscal expertise, strong leadership, and commitment to improving educational opportunities and quality. He is also remembered as a world traveler, marathon runner, pool party host, wine connoisseur, Golden State Warriors fan, and avid gardener of fruit trees, flowers, herbs and vegetables. Ed was married to Blezilda Soriano Maduli for over 30 years until her passing in 2008. He later remarried and is survived by his wife Cyril Fernandez Maduli and her son Briane, children and spouses Denise and Stephen, David and Maritez, and grandchildren Miles, Quincy, Zuleikha, and Apollo. He is also survived by his siblings Estrella, Dennis, and Flaviana, and many more cousins, nieces, nephews and extended family members.

Edralin &#8220;Ed&#8221; Maduli was born on May 16, 1944 in Batac, Ilocos Norte in the Philippines. The eldest of four siblings, Ed was a decorated military veteran and a highly respected longtime educational leader in the California Community... View Obituary & Service Information

The family of Edralin "Ed" Maduli created this Life Tributes page to make it easy to share your memories.

Send flowers to the Maduli family.