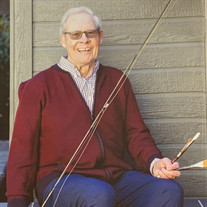 We lost a great light. But gained a great legacy. Jan 24th, 2022, marked the passing of Earl Fogelberg, MD. He passed quietly at his Santa Rosa home with Norma, his wife of 22 years, at his side, having spent time with his loving family in the days before. Earl was born in Chicago Illinois, a 2nd generation American to Signe and Vanus Fogelberg. He attended Chicago Latin School where he met his first love, Ann Bowey. At the tender age of 15, he told her in 10 years he was going to marry her (which of course he did). He was also known to tell her, “Stick with me I am going places, I have a lucky horseshoe in my pocket”. It was Ann who encouraged Earl to apply to Princeton. He graduated with high honors from Princeton and moved to New York City to start medical school at Columbia University P&S. Earl was passionate about medicine. In his third year at Columbia, Ann and Earl were wed in New York City. Their reception was at the Plaza Hotel. After declaring his intent to pursue Orthopedic Surgery, he began his journey in the military as a Captain in the Air Force, doing a preliminary rotation at Stead Air Force base. It was here, their family expanded and their first child, Renee was born. They later returned to Washington Heights, NY to complete his Orthopedic residency and spinal fellowship. A son, Erik, was born during that time. Their time back East didn’t last long as Ann convinced Earl to move to California to begin his career as a surgeon. His first partnership was at the Ralph K. Davies medical center joining Dilworth Cannon MD, and Benjamin Maeck MD. They worked incredibly hard and were passionate about their work, but they always made time for laughter and appreciating all the little things life had to offer. Earl loved teaching and joined the faculty at UCSF, partnering with Richard Bradford MD and his team, in the orthopedic unit. Despite tireless calls and late-night surgeries, he was a dedicated father and husband. He was often seen with a Labrador at his side ready for weekend hunting adventures, or on walks in the Presidio with his kids. He joined the Ski Patrol at Alpine Meadows as a MD consultant. There were many fun-filled weekends charging down the mountain with his kids at his heels. Despite his many privileges Earl never forgot his roots and the tough days growing up in Chicago. He became a member of the Guardsmen and rose to be on the board, helping to design programs for Bay Area kids who were less fortunate. While working tirelessly in private practice and as a faculty member at UCSF, he always managed to schedule time to be on the river. His love of fly fishing was so ingrained, he found peace and solace on the river. His other love was the Bohemian Club where he joined as a makeup artist leveraging his artistic talents to shape the many faces and characters on stage. He relished in his backstage involvement and having a critical hand in shaping their persona of actors through a transformation with makeup. Tragically in 1999, he lost his wife Ann. It was soon after this, he was blessed to fall in love again with Norma Spreeman who was to be his wife and steadfast partner till his passing. Together they built a family with the addition of Norma’s daughter Taylor and continued to explore the world, fly fish, paint together and enjoy life to its fullest. Earl retired at 80 years old and focused his passions on growing world class heirloom tomatoes and returned to the joy of water color landscape painting. This culminated in his final art show featured at The Varenna in Santa Rosa, a magnificent compilation of all the extraordinary pieces he created in over a decade of painting. Earl was diagnosed with pancreatic cancer in Sept of 2020. What became most important to him at this time was providing funding for cancer trials and treatment. Before his passing Earl funded the endowment that bears his name at Sutter Health in the North Bay. He is survived by his wife Norma (Spreeman) Fogelberg, his children Renee Flaherty and Erik Fogelberg, stepdaughter Taylor Bruner, Michael Flaherty his son in law, and his grandchildren Sam, Connor, Caitlin, Alison and Jack. Private family service will be held for the immediate family, and a larger Celebration of Life will be planned for 2022 for his many friends and family. The family thanks you for your contributions to The Earl V Fogelberg MD Endowment Fund for Sutter Santa Hospital Cancer Trials and Treatment so Earl’s legacy of helping others may continue. http://sutterhealth.org/earlfogelbergmd

We lost a great light. But gained a great legacy. Jan 24th, 2022, marked the passing of Earl Fogelberg, MD. He passed quietly at his Santa Rosa home with Norma, his wife of 22 years, at his side, having spent time with his loving family in... View Obituary & Service Information

The family of Earl Fogelberg created this Life Tributes page to make it easy to share your memories.

We lost a great light. But gained a great legacy.

Send flowers to the Fogelberg family.