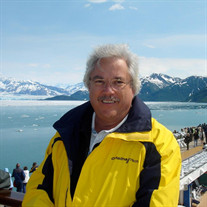 Donald “Don” Joseph Wexler of Zephyr Cove, Nevada passed away Thursday, June 9th surrounded by his loving family after a four-month battle with cancer. Don was born June 15, 1947 in San Diego, California, the youngest of four boys born to Max and Janet Wexler. Upon completing his degree in electrical engineering at San Diego State University, Don enlisted in the United States Air Force, serving in a special electronics group in South Carolina and Japan from 1968-1972. After his service to our great country, Don began a career in the technology industry with Hewlett Packard in San Diego, eventually relocating to Sunnyvale. In 1981, Don started his own company, Automated Test Engineering, Inc. (ATE), which he ran as CEO until 1998 when he sold it, got married to June, and moved to Lake Tahoe. Following a brief retirement, Don was recruited to work for Apple managing software for their test development platform, but he remained in Lake Tahoe, commuting back and forth to Cupertino every week in his Cessna 210 airplane. He worked at Apple for nearly 15 years before retiring a second time in 2013. But Apple came calling again in 2016 when they asked Don to help with the launch of a new line of computers. At the end of 2016, Don retired, this time for good, and he turned his focus to traveling the world with June from their beloved home in Lake Tahoe. Together, they sailed the seven seas, taking cruises to amazing places including: Antarctica, Alaska, South America, Hawaii, China, The Baltic, fjords of Norway, The Mediterranean, Iceland, New Zealand, Australia, Dubai, Arabia, and The Holy Land. After a lifetime of flying, Don sold his Cessna 210 and took up sailing. His favorite trip was sailing through the San Juan islands. Don also cherished his two Dodge Vipers: a red 1994 roadster and a blue 1996 coupe with white racing stripes (#64 off the assembly line). He and June were early members of The Viper Club of America and drove around the country attending car events with all their Viper friends. Clearly one of his favorite memories was driving his 1996 blue Dodge Viper around the Indianapolis Motor Speedway before the Indy 500. Don was a devoted husband, father, grandfather, brother, uncle and friend. During COVID, he added “teacher” to his resume, when he and June took in two of their grandchildren. For 18 months, he helped them navigate the new world of online school during the pandemic. He also stepped in as the technical advisor for St. Johns in the Wilderness Episcopal Church in Glenbrook, Nevada, installing cameras and a big screen so that everyone could enjoy Sunday service via Zoom. Don was a fixture in St. Johns on Sundays, arriving early and staying late. One could say that he finally found his calling at church! His spirit lives on in the congregation and with the many friends, co-workers, Viper club members, neighbors, and family who loved him. Don is survived by his wife, June, of 24 years; his stepson, Michael Trent (Grace) of Marietta, GA and their two sons – Matthew and Ryan; his stepson Derek Trent (Lisa) of Alpine Meadows, CA and their four children – Camryn, Dylan, Jaylyn and Steven; and his brother, David Wexler (Sharon) of Pulaski, TN. He is preceded in death by his parents, Max and Virginia Elizabeth “Janet” Wexler, and two older brothers: Harry and Robert Wexler. A memorial service will be held in Lake Tahoe at a later date. In lieu of flowers, please consider a donation to Don’s favorite charity, St. Jude’s Children Research Hospital. https://www.stjude.org/

The family of Donald Joseph Wexler created this Life Tributes page to make it easy to share your memories.

Send flowers to the Wexler family.