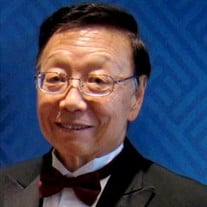 David Tsang, 78, passed peacefully away from lung cancer surrounded by his family on January 11, 2021. He is survived by two daughters, two sons, their families, and Cathy, his wife, of over 50 years. David was respected as a successful Chinese American semiconductor entrepreneur in the Bay Area having witnessed and participated in the growth of Silicon Valley for over the past half-century. David, born in 1942 in Liaoning, China, immigrated to the United States in 1962 where he began his American journey. David was a pioneer for his family, being the first to immigrate to the US, and showing them a path to a better life. David went on to found multiple companies and supported many other companies through his venture capital endeavors. With his success, David was inspired to pay it forward. He recognized that through his work and community involvement, he could help others do the same for their families. In addition to his work achievements, he personally funded and led many non-profit organizations to inspire Asian American involvement in leadership, business, education, and politics. In recent years, David particularly devoted himself to Shin Shin Education Foundation and the Alliance for Preserving the Truth of the Sino-Japanese War. In his free time, David most enjoyed getting together to share a meal with his family. Weekly family brunches at the local country club and feasts at his favorite steakhouse with beer and wine are forever etched in the hearts and stomachs of his children and seven grandchildren. David achieved his “American Dream”, and his peers, friends, and family will always be inspired by his determination to support others to realize their own dreams. The family appreciates your thinking of David, but please no need to send flowers as there will be abundant flowers. However, if you feel the need to send something, a card or a donation to a worthy cause would be what David would want.

David Tsang, 78, passed peacefully away from lung cancer surrounded by his family on January 11, 2021. He is survived by two daughters, two sons, their families, and Cathy, his wife, of over 50 years. David was respected as a successful Chinese... View Obituary & Service Information

The family of David Tsang created this Life Tributes page to make it easy to share your memories.

Send flowers to the Tsang family.