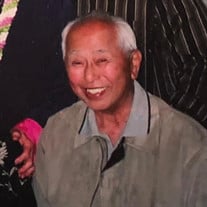 David Kwan (9/28/29-12/10/20) David Kwan born and raised in SF Chinatown, CA, died peacefully on December 10, 2020. Born September 28, 1929. Married to Lillian Jung Kwan, until her passing in 1979. Survived by his second wife, Daisy Kong Kwan, married 1991. His children Darryl and Angela Kwan, son in law, David Crawford, step daughter, Cheryl Wood, grandchildren, Ayla Kwan, Kyle & Lily Crawford, step grandchildren, Virgil, Amanda & Victoria Wood. The surviving siblings include Gloria Lee, Hanford Kwan and Victoria Woo. In addition, numerous nieces and nephews from the Jung, Kwan, Kong families. Mr. Kwan enjoyed various sports, tennis in particular. He started playing on the single tennis court located in SF Chinatown. He worked in accounting for Pan Am Airlines and for the State of California. But, tennis was the activity he returned to for his leisure. He played various tennis tournaments in the Bay Area with trophies to show his competitive spirit and skill of the game. His favorite places were the Peninsula Tennis Club, where he had been an active member for 35 years. The other interests that Dave participated in was photography, the 49ers, his grandchildren, and Hawaii. He never turned down a home cooked meal or parties. He will be remembered for his kind smile, sense of humor and quick wit. He was adored by many and will be deeply missed.

The family of Mr. David Kwan created this Life Tributes page to make it easy to share your memories.

Send flowers to the Kwan family.