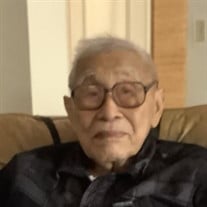 Clarence K.S. Ching, 92, nickname Sonny, retired stockbroker passed away peacefully June 20, 2021. He was born in Honolulu, Hawaii, to George Fook Ching and Agnes Chun Mun. As a boy scout he enjoyed camping at Hanauma Bay and fishing off the reef at San Souci beach. As a teenager during summer months he loved playing volleyball at Ala Moana beach. In 1947 he moved with his family to San Francisco. His parents opened CHINN’S: The Aloha gift shop, on Grant Ave where the family sold Hawaiian trinkets such as bobble head hula dolls, Hawaiian print ties and palm tree back scratchers. In 1951 Clarence was drafted into the U.S. Army. Stationed in Germany, during the Korean War, he achieved the rank of Corporal and received an Army occupation medal for Germany. As a veteran of the Korean War, he was a member of the VFW (Veterans of Foreign Wars of the United States) and in 1965 he served as Commander of the VFW Chinatown Post 4618. He began his career as a stockbroker in 1960 at East-West Securities in San Francisco. From the time he started as a stock-broker he never stopped watching the stock ticker tape. Even with the onset of digital trading, he continued to watch the ticker tape on CNBC during market hours. He would say “the tape is the only way to ‘feel the markets’ and where it was headed.” Clarence married Millie Lai in 1954. Every year with their three children they took road and camping trips to visit different parts of the United States and Canada. After their children were grown, Clarence and Millie traveled extensively around the world, but Clarence’s most favorite travels were road trips to national parks and Disney vacations with his grandchildren. Clarence is preceded in death by his wife Millie, his parents George and Agnes Ching, and brother Calvin K. Ching. Clarence will be forever loved by his sister Geneva and brother-in-law Donald, daughter, Karen (Jim,) sons Clayton (Carla) and Carlton, grand-daughters Marin, Camille (Jason), grandsons Rhys, Morgan and wife Mai, great grand-daughter Isabel and great grand-son Eli. Burial Service will be Monday, July 5, 11 AM, Skylawn Memorial Park, San Mateo, California. Donations may be made to: The Wounded Warrior Project https://www.woundedwarriorproject.org/donate The Salvation Army Silicon Valley https://siliconvalley.salvationarmy.org

Clarence K.S. Ching, 92, nickname Sonny, retired stockbroker passed away peacefully June 20, 2021. He was born in Honolulu, Hawaii, to George Fook Ching and Agnes Chun Mun. As a boy scout he enjoyed camping at Hanauma Bay and fishing off the... View Obituary & Service Information

The family of Clarence Kwai Sung Ching created this Life Tributes page to make it easy to share your memories.

Send flowers to the Ching family.