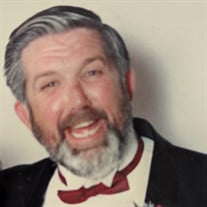 In Loving Memory of Charles Robert Clanton Son of Lucille and Herman Clanton, born in Warren, Arkansas on 6/22/1939. Passed away on 4/16/2022 in Rayne, Louisiana. He was preceded in death by his wife of 51 years Ada Marie Clanton. Survived by his children Richard (and Bo) Flynn, Brian (and Kathi) Flynn, Steven (and Edie) Flynn, Bridget (and Rich) Ludy, Michael (and Martha) Flynn, and Michael (and Marietta) Fish. He was Papau to his Grandchildren- Ned, Billie, James, Matthew, Katie, Sean, Cassidy, Chris, Molly, Michael, Charlie, and Patrick, and his Great-Grandchildren Kian, Kieran, Nya, Brody, Shelby, Jacob, and Caleb. He was loved and cared for by his niece Nadine and husband Pat Breaux and their Family in Louisiana. He truly enjoyed his time with them during the last years of his life, and will be greatly missed by all. Charlie grew up in Redwood City and attended Sequoia High School. He served in the US Army, a time that he was proud of. He married Ada and they raised their family with lots of love and fun times together. He was a long-time employee of Randtron Systems in Menlo Park. Charlie and Ada lived in Fremont after moving from Redwood City and lived in Waterford for a few years after retiring. They later moved to Louisiana to live with Ada’s sister’s family, where they could enjoy the open space and relax with family and friends. Charlie was a great storyteller, and we heard about his childhood and what Redwood City was like when he was a child. He told stories of his family back home in Arkansas and of his time there. He was a fan of John Wayne and old western movies and would watch them everyday if he could. He loved the history of the old wild west on the screen. We all grew up watching westerns because of him, and they are some of his family’s favorites now. To Ada’s dismay, Charlie was a true Rams Football fan. (She was a true SF 49er fan). One of his teams last games was the 2022 Superbowl game, and his Rams won- there was a lively living room that day! Charlie loved his life with his family and friends. Charlie will let his life speak for the kind of man he was, and the kind of man all men strive to be. His good-hearted nature will be missed by all who knew him.

In Loving Memory of Charles Robert Clanton Son of Lucille and Herman Clanton, born in Warren, Arkansas on 6/22/1939. Passed away on 4/16/2022 in Rayne, Louisiana. He was preceded in death by his wife of 51 years Ada Marie Clanton. Survived... View Obituary & Service Information

The family of Charles Robert Clanton created this Life Tributes page to make it easy to share your memories.

Son of Lucille and...

Send flowers to the Clanton family.