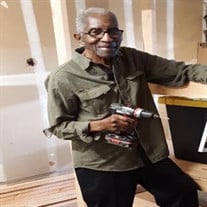 The End of the Six Decade Love Story Charles Sidney Cato was born in Louisiana in either 1928 or 1929, depending on who you asked. According to our birth certificates, he was born March 28, 1929. He was 1 of 8 children. His siblings preceded him in death. He was raised in his early years by his parents and with their passing his elder sisters stepped in and picked up the pieces. The time he spent with his father had a lasting impression and was instrumental in shaping who he became. His craftiness with his hands; like the ability to build furniture, repair equipment, fix cars, plumbing, and electrical to name a few, can all be attributed to his Dad. His business acumen came from his Mother, a woman with no formal education. She taught herself how to read well enough to know when he skipped a word while reading to her. The foundation his parents laid was the corner stone to the man that he became. The accomplishments Dad achieved in his lifetime are incredible when you consider he dropped out of school after completing the 9th grade. His first real job was hauling gravel in Glenmora, Louisiana in 1947 where he met our Mom, his one true love. They met on a warm summer day in June of 1947. There she stood across the railroad tracks. He crossed over an introduced himself. She said “hello, it’s hot, buy me an ice cream cone.” He nodded and gave her $20 dollars. She bought a double scoop. Before they knew it, they were married. This started the “Six Decade Love Story.” Charles and Stella started their family in 1950 and moved to California in 1954. Their union produced nine children. After moving to California, they joined St. Mark Institutional Missionary Baptist Church in 1961 under Reverend R. J. Foreman. All nine of their children were baptized at St. Mark. He served faithfully on the Building Fund Committee. He wasn‘t the every Sunday member; but was a member who practiced 2 Corinthians 9:7 “Each man should give what he has decided in his heart to give, not reluctantly or under compulsion, for God loves a cheerful giver.” He was an enthusiastic reader of the bible and sought a deeper understanding of its meaning. He provided a stable home for his family allowing Stella to be a homemaker. He supported his family by working for San Francisco Municipal Railway (MUNI) for over 30 years. He was blessed to have been retired from MUNI longer than he worked for them. In addition, his keen business sense and ability to repair anything with a motor afforded him the opportunity to run his own repair business and Laundromat. He served in the Army during the Korean War and served as a Most Worshipful Master with Prince Hall Grand Lodge. Charles was called home, Tuesday, April 7, 2020 surrounded by love ones. We were blessed to celebrate his 92nd Birthday and to have the opportunity to let him know how much he was loved and appreciated. He was preceded in death by his wife of 64 years Stella; his parents Ida and Alphonse, his brothers Elmo, James, Leslie, Ellis and Herman, his sisters Irma and Laura, his sons Berlin and Donald Ray, granddaughter Tasnika and son in laws Hal Springer and Steve Holland. He leaves to cherish his memories: four daughters Deborah, Abby, Marie and Shari; three sons Sidney, Stevie and Kevin; Sister in Law Josette, 2 Son in Laws, 3 Daughter in Laws, eighteen Grandchildren, eighteen Great Grandchildren and a host of nieces and nephews. To ensure the health and safety of our community, we are following all guidelines set by local, state and CDC officials. If you are planning on attending a service, please contact the funeral home in advance, so that we can plan accordingly.

The End of the Six Decade Love Story Charles Sidney Cato was born in Louisiana in either 1928 or 1929, depending on who you asked. According to our birth certificates, he was born March 28, 1929. He was 1 of 8 children. His siblings preceded... View Obituary & Service Information

The family of Charles Sidney Cato created this Life Tributes page to make it easy to share your memories.

The End of the Six Decade Love Story

Send flowers to the Cato family.