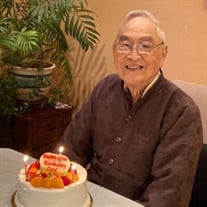 Beloved husband, father, grandfather, uncle, and friend, Bing passed away peacefully in his sleep at age 96 on November 17, 2020. He was home and was surrounded by his family, just the way he had wanted. Bing lived a long, healthy, and happy life. He was born in Shanghai to Law Ting Cheng and Kwok Chun So, moved to Hong Kong as a young adult, worked as a pharmaceutical sales manager, fell in love and married Ying Kwok, and together raised four children (step-daughter Phoebe Kwok, son David Low, and daughters Cindy Low Angelo and Nancy Low). In 1975, with the help and sponsorship of his elder sister Shirley Tong, Bing immigrated with his family to the United States to give his children more opportunities. His decision to move to a new country inspired his younger half-brother Chiu Hung Low to do the same. The two families settled in San Francisco. Although they did not find any gold in Gold Mountain, they did find plenty of new adventures as they built a life for themselves and their families. In time, Bing and his family all became naturalized U.S. citizens and proud Chinese Americans. Bing enjoyed an active lifestyle, adhered to a healthy diet, and exercised regularly. He had a childlike curiosity and liked to try new things. He took annual trips with his family all over the world, to places near and far. Wherever he went, he showed up smartly dressed, wearing a bright smile. In photos, just as in person, he always exuded joy and spryness. His family is thankful to have many, many wonderful photographic memories of him. Bing will be remembered by all for his generosity, kindness, and easy laugh. His surviving wife, children, daughter-in-law Sharon Kwan, granddaughter Sydney Low, and son-in-law Paul Angelo will forever keep him in their hearts.

Beloved husband, father, grandfather, uncle, and friend, Bing passed away peacefully in his sleep at age 96 on November 17, 2020. He was home and was surrounded by his family, just the way he had wanted. Bing lived a long, healthy, and happy... View Obituary & Service Information

The family of Mr. Bing Yao Low created this Life Tributes page to make it easy to share your memories.

Send flowers to the Low family.