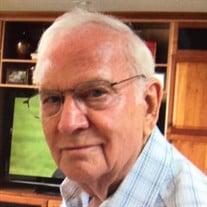 William “Bill” Allshouse passed away peacefully on April 16, 2020 with his wife Donna, and children Douglas, David, and Patty Soto at his side. He entered this world on Groundhog Day, February 2, 1925, the son of Marlin J. and Marian (Hess) Allshouse in Youngstown, Ohio. He was always very independent and an adventurer. His childhood was accented by solo trips to see his grandparents in Newcastle, PA. He covered the 22 miles once on roller-skates at age 12 and twice on bicycle. He used that same bicycle on his first job, delivering the Vindicator on his paper route. Bill attended The Rayen School. While there, he found joy in playing trumpet in the band. It was at a school dance at the Stambaugh Auditorium that he first saw the love of his life, Donna Mackey, across the ballroom. He told his date, “ I am going to marry that girl.” One month later, they had their first date. That was 78 years ago and he was smitten with her to the end. One month after graduating in June 1943, he left to serve our country in WWII. On June 24,1944 at age 19, he drove his Army jeep onto the sand at Utah Beach in Normandy, France as a soldier in the 23rd Headquarters Special Troops “Ghost Army”. Tasked with deceiving the enemy, they carried out many missions across Europe, traveling to 5 countries. Returning home following VE Day, he was awaiting assignment to the Pacific when the war ended. He and Donna wed on May 29, 1946 and they welcomed Douglas (1947), David (1949) and Patty (1954) into their life. As Bill was developing a great reputation as owner of Allshouse Carburetor and Ignition Service in Youngstown, the family moved to Hubbard, Ohio. There they were active members of the First Methodist Church where Bill and Donna sang in the choir. Bill was also a member of the Western Star Lodge No. 21of the Masonic Order in Boardman, Ohio. Following a family vacation to California in 1960, Bill decided to move west. In 1964 the family moved to Santa Clara, California. He worked at Olinger Auto Repair and Friendly Motors before becoming a Service Writer at the Hewlett-Packard vehicle maintenance garage in Sunnyvale. One of the responsibilities that he most enjoyed at HP was being trusted to chauffeur Mr. Hewlett and Mr. Packard on various trips. Whether it was to or from the airport or for a local business meeting, Bill enjoyed this part of his job. One of his most memorable assignments was to escort former Secretary of State Henry Kissinger while visiting HP. Bill said that Mr. Kissinger was a delightful gentleman that treated him with the utmost respect. Retirement brought many adventures in their motorhome. Their first major excursion lasted 72 day, visiting every state in the Union, except Delaware. Canada and Nova Scotia were also on the list of places they explored in their “Little House”. Bill always enjoyed family gatherings, especially holidays. He was happiest surrounded by loved ones, enjoying the presence of his 3 children and 4 grandsons with their spouses, as well as 10 great-grandchildren. When gathered there were 26 in all. He felt truly blessed. A private family gathering will take place at a later date. In lieu of flowers, donations can be made to Lucile Packard Children’s Hospital in memory of William. To ensure the health and safety of our community, we are following all guidelines set by local, state and CDC officials. If you are planning on attending a service, please contact the funeral home in advance, so that we can plan accordingly.

William &#8220;Bill&#8221; Allshouse passed away peacefully on April 16, 2020 with his wife Donna, and children Douglas, David, and Patty Soto at his side. He entered this world on Groundhog Day, February 2, 1925, the son of Marlin J. and Marian... View Obituary & Service Information

The family of Bill Allshouse created this Life Tributes page to make it easy to share your memories.

Send flowers to the Allshouse family.