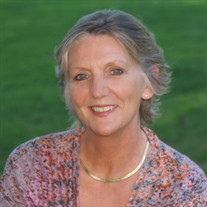 Mrs. Anne Marguerite Negus, 69, of Redwood City, passed away peacefully on June 26th at her home, surrounded by her loved ones. Anne was born in Bridgwater, Somerset, England, to Reginald Seward Henry Baker and Sheila Marie Baker on the 19th of April, 1952. She was raised on her family farm in the village of Chilton Polden and attended school at Bridgwater Grammar School. Anne went on to graduate from Newlands Park College of Education in Chalfont St. Peter, Buckinghamshire, after which she worked as an elementary school teacher for the British Army and was stationed in Iserlohn, Germany. She married Paul Negus on August 4th, 1979 at St. Edward's Church, in Chilton Polden, England. In 1990, she emigrated with her family to Menlo Park, California, eventually settling in Redwood City. In 2000, Anne became a licensed California Realtor and enjoyed a fulfilling career as a real estate agent. Anne was a loving and compassionate wife and mother of two boys. She loved the quiet peace found in the outdoors, and enjoyed gardening and bee keeping at home. She had a gift for caring about others and all creatures, rescuing and loving many dogs over the years. Anne is preceded in death by her father, Reginald Baker, and brother, Terry Baker. She is survived by her loving husband, Paul, her sons Mark and Andrew, their spouses Tara and Sabrina, her mother Sheila Baker, her brothers Peter and Geoffrey Baker, her sister Margaret, and her grandchildren, Grant and Lyla. As an expression of sympathy, in lieu of flowers, the family asks that memorial contributions be made in Anne’s memory to the Kidney Cancer Association, the Alzheimer’s Association, or The Marine Mammal Center. Anne’s family wishes to extend their sincere thanks to Dr. Srinivas and the nurses at the Stanford Medicine Cancer Center, as well as Jill Slyter and the entire team at Mission Hospice and Home Care, for their care and compassion.

Mrs. Anne Marguerite Negus, 69, of Redwood City, passed away peacefully on June 26th at her home, surrounded by her loved ones. Anne was born in Bridgwater, Somerset, England, to Reginald Seward Henry Baker and Sheila Marie Baker on the 19th... View Obituary & Service Information

The family of Anne Marguerite Negus created this Life Tributes page to make it easy to share your memories.

Send flowers to the Negus family.