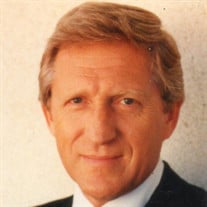 Andre Volant, 81, of San Bruno, California, passed away on October 10, 2021 due to natural causes. The funeral services will be held in the chapel at Skylawn Funeral Home and Memorial Park in San Mateo, California at 12:00 P.M. on November 19, 2021. Skylawn Funeral Home is handling all funeral arrangements. Andre was born in Poland on July 28, 1940. He was the only son of Boleslam and Zusanna Suzmorek. He graduated and received a degree from State Technical College in Warsaw, Poland, majoring in Electronics Measuring Instrumentation Technology. Andre worked for many years in Silicon Valley California in Research and Development as a Computer Test Engineer for Komag, Inc., Maxtor Corp., Unisys/Memorex Corporation and finally, retired from Seagate Technology. He enjoyed windsurfing, snow skiing, tennis, music (preferably Blues and Rock and Roll) and aviation. Andre was a licensed Glider Pilot and Flight Instructor. He also held the position of Lieutenant of Civil Air Patrol of California Wing. And he was a humanitarian, always involved with human rights and causes for himself and others. At 50 and still the adventurer, Andre discovered windsurfing. He mastered the skill quickly and effortlessly. As he developed his love for the sport, he frequently windsurfed at Coyote Point in San Mateo, San Francisco Bay at Crissy Field Golden Gate, Hawaii and took annual visits to Venezuela. Eight years later at 58, Andre windsurfed 25 miles from around the San Francisco Bay, from Coyote Point Park in San Mateo to Alameda’s Crown Beach and back. It was a tremendous undertaking, a feat no one had accomplished on record at the time. As a youth growing up in Poland, Andre was fascinated with flying planes. At sixteen, he got the opportunity to parachute from a plane and was hooked on flying ever since. He eventually learned to fly, got his license, worked as a commercial pilot, flew rescue missions and taught glider lessons. One of his memorable accomplishments with flying was organizing a Glider competition for the Polish gliders to come to America and compete. Andre is survived by his significant other, Regenia Robinson of San Bruno, California, his sister Barbara Stankiewicz Szumorek of Warsaw, Poland, friends Janusz and Andrea Mika of Phoenix, Arizona and a host of other family members and friends. Andre will be missed immensely but never forgotten.

Andre Volant, 81, of San Bruno, California, passed away on October 10, 2021 due to natural causes. The funeral services will be held in the chapel at Skylawn Funeral Home and Memorial Park in San Mateo, California at 12:00 P.M. on November... View Obituary & Service Information

The family of Andre Volant created this Life Tributes page to make it easy to share your memories.

Andre Volant, 81, of San Bruno, California, passed away on October...

Send flowers to the Volant family.