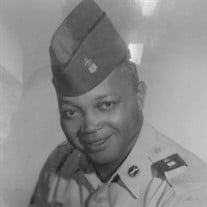 Abner L Slater Jr a retired US Army infantry veteran resided in San Jose California passed away on Saturday, June 20th 2020 Abner was born on Friday September 6th 1929, he was 90 years old. Preceded in death by his father Abner L. (Royal) Slater WW1 veteran, and Mary Crawford Slater of Ft Worth,Texas He was 4th child of 15 siblings. He grew up during the Great Depression. Abner joined the military service after High School. Where he attended Como Elementary and IM Terrill in Ft Worth, Texas. He later completed his Accounting Degree, at Evergreen College, in San Jose, Ca At 20 years, he was called to the Korean Conflict. 1950. He was with the 21st Infantry (Gimlets). Was wounded, then faced the Vietnam conflict 1960s. He Received many awards such as multiple Bronze stars, United Nations ribbon, combat and Korean Medals of merit.Trained men in Sherman tank division, served at Berlin Wall and in Japan. He was a trainer of men and women to survive, in combat. Many lives were saved because he cared. Abner loved his family, country and his belief in his faith carried him through life challenging times. He leaves behind his loving wife, Masae Iechika Tsuji Slater, of 68 year union, their nine children. Marie, Abner, Marvin, Alan, Robert, Johnny, Joseph, Judy and Joyce. 15 grandchildren, 4 great, and 4 great great grandchildren. 4 brothers, Jack (Helen), Lawrence ( Leslie), Marvin ( Detra) of Ft Worth, Texas and Joe ( Henrietta) Slater of Colorado Springs, Co. He was kind, dedicated and someone you could depend on. He says, as long as the heart remembers, as long as the heart still cares we do not part with those we love because they're with us everywhere.. With heartfelt gratitude from the Slater family we appreciate your love and support. He will be missed by many relatives, and friends the world over . He had a Life well lived. The Slater family To ensure the health and safety of our community, we are following all guidelines set by local, state and CDC officials. If you are planning on attending a service, please contact the funeral home in advance, so that we can plan accordingly.

The family of Abner Slater created this Life Tributes page to make it easy to share your memories.

Send flowers to the Slater family.