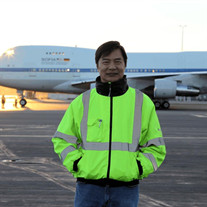 Dr. Abe Cheng was born in Taipei, Taiwan in 1953. He was the fourth child in a family of 7 children. Abe was greatly interested in physics and math and wanted to pursue a career in science. He attended the best high school in Taipei: Taipei Municipal Jianguo High School from 1969-1972. Abe attended National Cheng Kung University in Tainan, Taiwan and graduated with a B.S. in Geophysics in 1975. He committed to two years of Taiwanese military service from 1975-1977 before moving on to pursue his master’s in Geophysics. Abe obtained his master’s degree from the College of Earth Science Research at National Central University in the Zhongli district of Taoyuan City in Taiwan in 1979. Abe decided to further his education by coming to the United States in 1979 to pursue his Ph.D. in Geophysics at UCLA. Abe worked under Professor David Jackson and obtained his Ph.D. in Geophysics in 1986. Then he completed one year as a post-doctorate before moving to Louisiana in 1987 to work as a Research Scientist for Sverdrup Technology at Stennis Space Center in south Mississippi. Abe and his family moved to the Bay Area in CA in 1999 so he could find new job opportunities and eventually decided to change career paths from Geophysics to Computer Science. He worked hard and studied intensively every day to become proficient in computer science knowledge and earn many computer science certificates. Abe obtained his first computer science job at Oracle and gradually became an expert in IT lab management in several jobs in the Bay Area in the last 20 years. He finally came to work at the SOFIA project with USRA. Abe Cheng passed away from natural causes on Sunday, February 14, 2021 in Cologne, Germany while he was on deployment for the SOFIA project with USRA and NASA. Abe is survived by his two children, Connor and Chloe Cheng; his partner, Wenlin Hsu and her daughter Polly Fu; his former wife, Judy Cheng (Connor and Chloe’s mother); his older sisters, 陳珠(Chen Zhu), 何金娥(He Jin-Xuan); and his younger sisters 陳梨鳳 (Chen Lee-Feng), 林梨美 (Lin Lee-Mei). Abe was preceded in death by his father 林聰明 (Lin Cong-Ming), mother 陳蘭妹 (Chen Lan-Mei), older brother 陳祝三 (Zhu San-Chen), and younger sister 陳梨雲 (Chen Lee-Yuan). Abe was a loving, kind, caring father, partner, brother and friend who can never be replaced. Our world will never be the same without him. Our heart hurts, but our grief is the perseverance of our love for Abe. The Cheng Family wishes to express our gratitude for the unconditional love and support during the loss of our father. We would like to thank the people who helped to shape Abe during his early career and supported him throughout his life. We are immensely grateful for our father’s friends and coworkers at SOFIA and USRA for supporting our family during our time of need. ﻿Connor & Chloe To ensure the health and safety of our community, we are following all guidelines set by local, state and CDC officials. If you are planning on attending a service, please contact the funeral home in advance, so that we can plan accordingly.

Dr. Abe Cheng was born in Taipei, Taiwan in 1953. He was the fourth child in a family of 7 children. Abe was greatly interested in physics and math and wanted to pursue a career in science. He attended the best high school in Taipei: Taipei... View Obituary & Service Information

The family of Dr. Abe Ching Chau Cheng created this Life Tributes page to make it easy to share your memories.

Send flowers to the Cheng family.